The Lions will meet with running back Mike Davis on Friday, according to NFL.com’s Ian Rapoport (on Twitter). Davis also has other visits lined up after his Detroit trip, Rapoport adds. 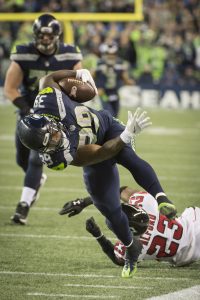 Davis, a fourth-round pick of the Niners in 2015, was claimed off waivers by Seattle in May. Although he didn’t make the Week 1 cut, the Seahawks signed him to the taxi squad after releasing him. In November, Davis earned a promotion to the varsity squad when C.J. Prosise landed on IR.

Davis’ stat line doesn’t jump off the page, but he did have some performances of note late last season. On Dec. 10 against Jacksonville, he ran for 66 yards off of 15 carries, good for a 4.4 yards per carry average. Then, in the season finale against Arizona, he had 48 yards off of ten attempts. He’s not a surefire answer for the Lions’ running woes, but he could compete for a spot on the roster.

On Friday morning, the Lions announced that running back Zach Zenner has been re-signed. If Davis is inked, that would make six RBs under contract for Detroit. Even then, they’d still continue to explore options in free agency and the draft.

2 comments on “Lions To Meet With RB Mike Davis”