The Broncos have waived running back Juwan Thompson, according to Mike Klis of 9News (Twitter link).

Thompson, 25, has been part of Denver’s roster for three seasons, but has seen his offensive contributions dip in each campaign. He ran the ball just eight times last season, managing 26 total yards and one score. All told, Thompson put up 4.3 yards per carry on 80 touches with the Broncos.

SATURDAY, 12:40pm: It’s official. The Broncos have place Anderson on the IR (via Klis on Twitter). The team has also officially promoted Thompson to the active roster (via Klis).

FRIDAY, 4:12pm: The Broncos will place running back C.J. Anderson on injured reserve and promote fellow rusher Juwan Thompson from their practice squad, reports Mike Klis of 9News. Anderson will be eligible to come back in eight weeks, and the 25-year-old announced on Twitter that he’s aiming for a playoff return if the 5-2 Broncos make it that far. 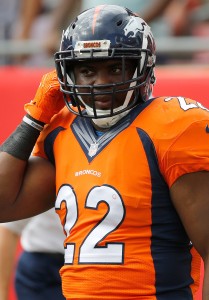 Over the Broncos’ first seven games, Anderson easily led the team in carries (110), ground yards (437) and rushing touchdowns (four). He also added 16 catches and another score. Anderson tore his right meniscus in the first quarter of the Broncos’ win over the Texans on Monday and underwent surgery Thursday.

With Anderson down, rookie Devontae Booker will take over as the Broncos’ go-to rusher. The fourth-rounder from Utah is the only back other than Anderson on Denver’s roster who has accrued double-digit carries this year. Booker has averaged an impressive 4.8 yards per attempt and found the end zone once on 51 carries. That score came versus the Texans, against whom Booker notched career highs in carries (17) and yards (83).

It’s Saturday, and that means the NFL’s various beat reporters are opening their mailbags and answering questions from the readers. Let’s take a look at some of the notable responses out of the AFC…

Some notes from around the NFL: