Redskins To Work Out Mark Sanchez, Others

The Redskins are bringing in a group of quarterbacks to work out on Monday, as Adam Schefter of ESPN.com tweets. Mark Sanchez, E.J. Manuel, and T.J. Yates will show their stuff for Washington as they seek a new backup quarterback for new starting QB Colt McCoy. Kellen Clemens and Josh Johnson will also get a workout, as NFL Network’s Ian Rapoport tweets.

McCoy was thrust into the starting lineup when Smith suffered a broken tibia and fibia. This trio of prospective QBs is not the most exciting bunch, but the Redskins are hoping that none of the three veterans will have to see action.

McCoy has not attempted a pass since 2015, but he is considered one of the NFL’s better No. 2 signal callers. In recent years, the team has flirted with the idea of starting him, so they clearly have confidence in his ability.

On the plus side, all four veterans offer NFL experience. By the end of business on Monday, one of them will take a step closer to seeing live action.

In the wake of Jimmy Garoppolo‘s ACL tear that will sideline him for the rest of the 2018 season, the 49ers are making moves to bolster their quarterback room, as the team will host a group of veteran signal callers according to head coach Kyle Shanahan (Twitter link via Nick Wagoner of ESPN).

The quarterbacks coming in for workouts tomorrow include Tom Savage, T.J. Yates, and Kellen Clemens. Wagoner adds that Shanahan said Matt Moore is “another possibility” and that Nick Mullens would likely be activated from the practice squad. Shanahan has already said that the team won’t bring in any competition for C.J. Beathard, so any quarterback signed would be added solely as a backup to Beathard.

Savage started seven games for the Texans last year, but found himself released by the Saints at final cuts after New Orleans traded for Teddy Bridgewater. Yates also most recently spent time with the Texans, starting three games for them last year. He’s bounced around the league as a spot starter, and even won a playoff game for the Texans a few years back. Clemens just recently saw his long tenure as backup to Philip Rivers come to an end when the Chargers decided not to re-sign him after the 2017 season. Clemens hasn’t seen meaningful action in a long time, as Rivers never missed a start during Clemens’ run with the Chargers.

Overall, it’s not exactly an inspiring group. Beathard should have no trouble keeping the starting job the rest of the way assuming he can stay healthy, and it’s possible the team opts to just stick with Mullens as their backup. Mullens was an undrafted free agent in 2017 who has stuck around on San Francisco’s practice squad.

Kellen Clemens saw the Chargers agree to terms with Geno Smith on Sunday night, and it looks like he’ll be in need of another employer. A potential suitor emerged Monday. 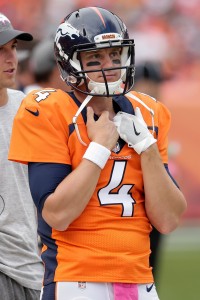 Blake Bortles agreed to an extension to stay in Jacksonville but is recovering from offseason wrist surgery. Kessler is the only other quarterback on the Jags’ roster, so the team may have some work to do for depth purposes. They will need more arms to run offenses during OTAs at the very least, and Clemens has been one of the game’s longer-tenured backups.

This is the 34-year-old passer’s first visit this offseason. He spent the past four seasons backing up Philip Rivers and has worked in this capacity for most of his career. Although, he started nine games for the 2013 Rams in Sam Bradford‘s stead. A former second-round Jets pick, Clemens has attempted 100 passes in a season just twice in a 12-year career.

A teammate of Clemens’ in St. Loius, Davis spent the 2017 season backing up Russell Wilson in Seattle. The Seahawks remain in need of a No. 2 QB behind Wilson, and both Davis and Clemens worked under new Seattle OC Brian Schottenheimer with the Rams. So, they would be natural options to play behind Wilson. Seattle has not been connected to either quarterback thus far this offseason, however.

Davis, 28, served as the relief arm for Bradford in 2014, when he suffered another knee injury, but has not thrown a pass in a game since the 2015 season while with the Browns.

Henne spent four seasons as Bortles’ backup but signed to play behind Patrick Mahomes in Kansas City. It’s likely the Jaguars will at least look at passers in this year’s draft, and with Kessler now in the picture, there might not be room for a veteran should Jacksonville take a quarterback in the middle rounds or higher. But both Henne and Davis have more experience as NFL backups than Kessler. 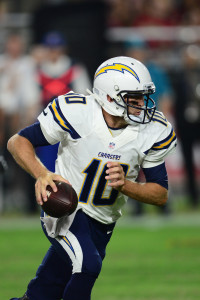 The Chargers and quarterback Kellen Clemens are in agreement on a one-year deal, tweets freelance reporter Michael Gehlken.

Clemens, 33, will return for a fourth season as Philip Rivers‘ backup, a job that’s been among the league’s simplest in recent years. During his three-year run with the Chargers, Clemens has attempted all of 10 passes in relief of Rivers. A former second-round pick, Clemens does have 21 career starts to his name, all coming with the Jets and Rams.

Thought to be trailing in their hopes to receive enough votes for the downtown stadium measure to pass this November, the Chargers mounted an offensive at a city councilman who voiced opposition to the team’s plan.

The Chargers funded a Facebook ad campaign against councilman Chris Cate, who is one of the leaders of a coalition called “No Downtown Stadium – Jobs and Streets First,” David Garrick of the San Diego Union-Tribune reports. The ads posted Cate’s office phone number and urged fans to call and ask why he wants the Chargers to leave.

The team stated in these ads and through a spokesperson it would leave for Los Angeles without a downtown stadium — Dean Spanos does have an agreement in principle to join up with Stan Kroenke and the Rams in 2017 — but that hasn’t been formally announced since the Chargers are still playing at the Mission Valley site that’s housed them since 1961. So this ad campaign could be another attempt at leveraging the city. This time, that effort is directed at voters. The Chargers, as of now, need a two-thirds majority for the stadium measure to pass.

“The Chargers have spent the past 15 years and tens of millions of dollars trying to find a solution to stay here in San Diego,” team spokesman Fred Maas said, via Garrick. “It is an insult to our fans and all San Diegans to have inexperienced politicians with blind ambition use our initiative as a vehicle to pursue higher office, like mayor. If they want us to leave for L.A, folks have every right to ask why, so please call Chris and ask him.”

Here are some of the latest details on recently agreed-upon or signed contracts from around the NFL.

The Chargers have re-signed quarterback Kellen Clemens to a one-year deal, the team announced in a press release. Clemens will serve as Philip Rivers‘ backup for the third straight season.

In his first two seasons in San Diego, Clemens attempted just nine passes in four games. He saw extensive action in 2013 with the Rams, starting nine games and tossing eight touchdowns against seven interceptions. In 44 career appearances (21 starts), the 10-year veteran has 16 TDs and 20 picks. The ex-Oregon Duck entered the league as a second-round pick of the Jets in 2006.