The season is over for Brandon Flowers. The Chargers announced that the cornerback has been placed on injured reserve. Flowers is now the 18th member of the Bolts to be placed on IR this season. 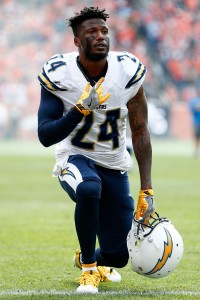 Flowers appeared in six games this season, totaling 28 tackles, six tackles for loss, five passes defensed and one interception which he returned for a touchdown against the Titans. Unfortunately, he suffered a pretty serious concussion in the Week 10 game against the Dolphins. This was not the first concussion of Flowers’ career and not even the first of the season. Given his history of head trauma, the Chargers are choosing to play it safe with the veteran.

Flowers’ season ends with him ranked as the No. 48 cornerback in the NFL by Pro Football Focus, albeit in a six-game season. His 76.6 overall grade is a big improvement over the dreadful 35.8 score he earned last year.

The Saints haven’t officially announced their roster cuts tonight, but Nick Underhill and Joel Erickson of the Advocate have rounded up the club’s moves (unless noted otherwise). By our count, these transaction leave the Saints with 77 players on their roster, meaning they’ll need to make three more moves before 3pm CT Tuesday.

The Saints have announced a slew of post-draft roster moves, confirming in a press release that they’ve added 13 undrafted free agents to their roster and cut three players who were on last year’s squad.

According to the team, safety Marcus Ball and inside linebacker Kyle Knox have been waived. Both players were contributors on special teams in 2014, and Ball also saw a little action on defense. Safety Ty Zimmerman was also cut by the club.

The Saints’ full list of undrafted free agent signees is as follows: