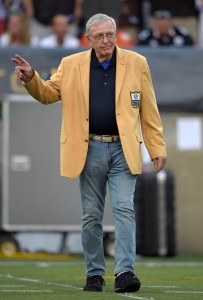 As we roll into the final week of the regular season, let’s round up some news and notes from around the league:

The Browns met with former Packers GM Ron Wolf, as Jason Wilde of ESPN.com writes. Wolf claimed that he was not offered any type of formal consulting role with the team, but Tony Grossi of ESPN Cleveland (Twitter link) hears otherwise.

Cleveland enters Week 17 with a 3-12 record and it’s fair to say that the jobs of coach Mike Pettine and GM Ray Farmer could be in jeopardy. If Farmer is removed as GM, one likely candidate would be Ron Wolf’s son, Eliot Wolf who serves as the Packers’ director of player personnel. However, the elder Wolf said Monday that he will not be involved in any way if the Browns decide to replace Farmer and want to pursue Eliot.

“No, no. That’s already come up,” Wolf said, according to Wilde. “I told [owner Jimmy Haslam] that that is an entirely different situation. He’d have to do that himself. I would not be a part of it.”

Wolf, 76, was inducted into the Pro Football Hall of Fame last summer in the newly created contributor category. Wolf, who took over the Packers in November 1991, is the man responsible for hiring coach Mike Holmgren and acquiring Brett Favre and Reggie White. In 2004, Wolf served as a consultant for the Browns and encouraged them to hire Holmgren as team president.

Let’s look at some of the news coming out of NFC locales Saturday afternoon.