J.D. McKissic‘s season has come to an end. The Commanders are placing the running back on injured reserve with a neck injury, according to NFL Network’s Ian Rapoport (on Twitter). The injury is expected to sideline the veteran for the rest of the 2022 season. 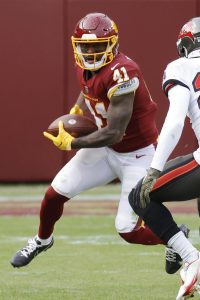 McKissic has missed Washington’s past two games with the neck issue. While it didn’t initially sound like the injury would be a season-ender, Rapoport notes that the injury will require a few months of rehab. On the bright side, it sounds like McKissic should be good to go for the 2023 campaign.

The running back found a home in Washington over the past two-plus seasons. 2020 was a career year for McKissic, as the pass-catching back finished with 954 yards from scrimmage and three touchdowns. Thanks in part to injuries, he didn’t get nearly as many touches in 2021, but he still managed to finish his second season in Washington with 609 yards from scrimmage and four scores.

This past offseason, the free agent RB committed to a two-year, $7MM contract with the Bills before reneging on the deal and re-signing with the Commanders. With the RB room getting a bit more crowded, McKissic had a smaller role in his eight contests, compiling 268 yards from scrimmage on 49 touches.

Brian Robinson has turned into Washington’s preferred option on the ground, with the rookie collecting a career-high 26 carries in Week 10. As a result, Antonio Gibson has inherited McKissic’s pass-catching gig and has flourished. Gibson is already zeroing in on career-highs in receiving stats, as the 24-year-old has hauled in 34 catches in 10 games.

Brian Robinson is in line to make his NFL debut tomorrow. NFL Network’s Ian Rapoport reports (on Twitter) that the Commanders have activated the rookie running back from the non-football injury list. Robinson returned to practice earlier this week. 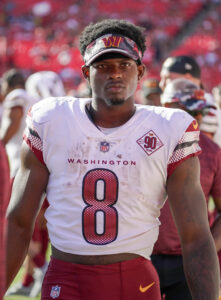 The third-round rookie suffered multiple gunshot wounds in an attempted carjacking at the end of August. The gunshots hit his hip and knee, though there was no serious damage to his ligaments, tendons, or bones, leading to optimism that Robinson would be back this season. The RB quickly provided some optimism when he was seen doing footwork and agility drills in the middle of September. His stay on PUP ended up being a short one, and after opening his practice window earlier this week, Washington will now welcome the rook to the 53-man roster.

Robinson was impressive through the spring and in training camp, leading some to wonder if he could be in line for first-team reps. The rookie saw a significant workload early on in the preseason, and he joined many of the team’s bona fide starters on the sideline for the team’s preseason finale.

It will be interesting to see how much work Robinson gets in a crowded backfield that also features Antonio Gibson and J.D. McKissic. After topping 1,000 yards from scrimmage in each of his first two seasons, Gibson has earned the start in each of Washington’s first four games this year. After hitting 130 yards from scrimmage in Week 1, Gibson has been limited to only 144 offensive yards over the past three weeks. He snap count has also continued to drop, leading some to wonder if he could be eyeing a reduced role with Robinson back in the lineup. McKissic, meanwhile, continues to serve in his standard pass-catching role, hauling in 17 catches through the first four weeks.

“You’ve got a good group of backs that rotate through and you try to find the matchups that you can exploit,” Commanders coach Ron Rivera said recently (via ESPN’s John Keim).

Robinson had a successful career at Alabama, including a breakout 2021 campaign where he finished with 1,343 rushing yards and 296 receiving yards. Thanks to his performance, he ended up being the sixth RB off the draft board when he was selected by Washington in the third round (No. 98) of this year’s draft.

J.D. McKissic is changing course. After agreeing to join the Bills, he is instead re-signing with the Commanders for the same price (Twitter link via ESPN’s Adam Schefter).

The 28-year-old was reported to be be signing with the Bills earlier this week, on a two-year, $7MM deal. The contract also includes $1MM in incentives. As Schefter notes, the Commanders didn’t need to eclipse that figure – simply match it, as it turns out – to convince him to stay in the nation’s capital.

A former UDFA, McKissic started his career in Seattle, where he registered one start in three years. He then played in Detroit for one campaign, totalling 438 scrimmage yards. He has found much more success in his two seasons in Washington, though.

In 27 games in Landover, McKissic has started 10 of those contests. He’s totalled 133 carries for 577 yards and three touchdowns. In the passing game, he’s added 123 receptions for 986 yards and another four majors. That versatility has made him a valuable piece of Washington’s offense, paired with lead back Antonio Gibson.

Schefter adds that the Commanders initially didn’t offer McKissic a new deal (Twitter link). It was only after the agreement between him and the Bills that the team expressed an interest in retaining him. McKissic’s preference was clearly to stay put, however, and it now appears that he will do just that.

The Bills are set to sign J.D. McKissic (Twitter link via Adam Schefter of ESPN.com). Once finalized on Wednesday, it’ll be a two-year, $7MM deal for the former Washington running back.

McKissic can also earn an extra $1MM in incentives, according to Schefter, which would boost the total value to $8MM. That’s a solid haul for the 28-year-old (29 in August), considering the ups and downs of his early career.

McKissic enjoyed a breakout season in 2017, when he compiled 187 rushing yards and one touchdown on 46 carries for the Seahawks. He also added another 34 receptions for 266 yards and two scores for good measure. After that, he lost much of his 2018 to injury.

The former undrafted free agent out of Arkansas State has rebounded well in recent years. After a productive 2019 with the Lions, he’s posted averages over 4.3 yards per carry in two D.C. seasons. Now, he’ll look to bring more of the same to the AFC East. 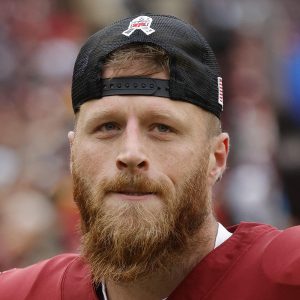 J.D. McKissic is heading to Washington. NFL.com’s Tom Pelissero reports (via Twitter) that the Redskins are signing the running back. It’ll be a two-year deal for McKissic.

After getting cut by the Seahawks at the end of last preseason, McKissic was quickly claimed by the Lions. The 26-year-old ended up appearing in a career-high 16 games for Detroit, rushing for 205 yards on 38 carries. He also added another 34 receptions for 233 yards and one touchdown.

Other than a brief stint with the Falcons, McKissic had spent much of his first three NFL seasons in Seattle. He got into three playoff games during his stint with the Seahawks.