Prior to waiving Stevenson, the Bills activated the second-year wide receiver from IR, Tom Pelissero of NFL.com tweets. The procedural move would allow Stevenson — should he clear waivers — to return to Buffalo on a practice squad agreement. This will still count toward Buffalo’s eight injury activations, but the team still has six remaining. A 2021 sixth-round pick, Stevenson combined for 21 punt- and kick-return reps as a rookie.

The Eagles placed Robert Quinn on IR on Tuesday but will have a reinforcement in Robinson, a 2021 Vikings fourth-round pick. The Eagles signed Robinson off the Vikings’ practice squad in mid-September. He has yet to play in an NFL game.

A former franchise-tagged player, Harris was unable to carve out much of a role in Denver. The ex-Vikings and Eagles starter only played in three games for the Broncos, who signed him just before the season. Despite having a six-INT season on his resume, the 31-year-old defender did not play a defensive snap with the Broncos.

12:06pm: Carroll indicated that Adams will need to “get some work done” as a result of the injury (Twitter link via NFL Network’s Tom Pelissero). Carroll also said, “I know it’s serious and it just breaks your heart,” pointing to a lengthy (if not season-ending) absence for the safety.

11:11am: The Seahawks’ surprise victory last night appears to have come at a significant cost. Safety Jamal Adams suffered a quadriceps injury in the second quarter which led to him being carted off the field. 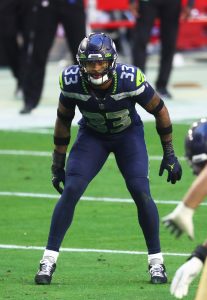 “His quadricep tendon I think got damaged some tonight,” head coach Pete Carroll said after the game, via ESPN’s Brady Henderson. “He got hurt. So it’s a serious injury.”

Adams has yet to play a full season since being traded to Seattle by the Jets in the 2020 offseason. A groin injury limited him to 12 games played in his first Seahawks season, one in which he earned a third straight Pro Bowl nod with 9.5 sacks. That performance was an encouraging sign for himself and the team, after Adams signed a four-year, $70MM deal which was a record for safeties at the time upon his arrival in the Emerald City.

The 2021 campaign was much different in terms of production, though. Adams failed to record a sack for the first time in his career, as his defensive responsibilities were altered. He did manage a pair of interceptions, but was once again sidelined by an injury. The second shoulder injury Adams suffered in the span of less than one calendar year ended his campaign in December.

Between that point and the beginning of the 2022 regular season, the former sixth overall pick also underwent finger surgeries, adding to his total number of ailments. If this latest injury is indeed serious, it would represent another blow to his Seahawks tenure, and leave the team without its highest-paid defender. Adams and Quandre Diggs – who inked a three-year, $40MM contract this offseason – were in line to operate as the anchors of Seattle’s secondary, one which includes a number of new faces at cornerback.

Josh Jones took over for Adams following the injury, and made seven total tackles during last night’s game. The 27-year-old journeyman was a second-round pick of the Packers, but also spent time with the Cowboys, Jaguars and Colts before joining the Seahawks last season. He has 26 starts to his name, a total which could stand to increase if Adams misses significant time.

One of the Colts’ cornerstone players will be sidelined for their Week 13 game against the Texans. Ryan Kelly is now on Indianapolis’ reserve/COVID-19 list.

The Colts had previously seen every other offensive line starter miss time this season, with injuries intervening at various points for the acclaimed group. Kelly, however, had been Indy’s rock here. The former first-round pick had started each of the Colts’ 12 contests this season.

The rest of the Colts’ offensive front is currently healthy, and the Colts’ Week 14 bye points to Kelly missing just one game because of this development. While Kelly missed time in 2017 and ’18, he has only missed one game over the past three seasons. During that time, the Colts’ O-line has become one of the NFL’s best. Kelly made the Pro Bowl in 2019 and last season. This year, Jonathan Taylor has amassed a significant lead in rushing yards behind that group. Taylor’s 1,205 yards lead the league; Derrick Henry still sits second at 937.

Additionally, the Colts activated Khari Willis off IR and waived safety Josh Jones. A second-year safety starter, Willis has missed the past four games. The Colts had played without both safety starters in November, with Julian Blackmon having torn his Achilles early this season.