The Browns are having persistent trouble keeping linebackers healthy. They lost another starter Sunday, with Kevin Stefanski confirming Sione Takitaki will miss the rest of the season with an ACL tear. 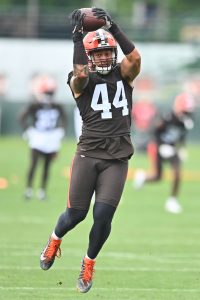 This comes at a brutal point for Takitaki, who is months away from his first crack at unrestricted free agency. A former third-round pick out of BYU, Takitaki has started 29 games for the Browns, who drafted him during John Dorsey‘s GM tenure. With that regime no longer in place, it will be interesting to see how the Browns handle the fourth-year defender’s free agency. Takitaki, Walker and Deion Jones are eligible to hit the market in 2023. The team’s restructure with Jones, upon acquiring him from Atlanta, took a year off his Falcons-constructed extension.

Takitaki broke into Cleveland’s starting lineup during the franchise’s best season since rebooting, and he both notched a regular-season pick-six in that 2020 slate and intercepted Ben Roethlisberger during a COVID-affected Browns team’s wild-card upset win. This season, Pro Football Focus rates Takitaki (71 tackles, one sack, one forced fumble) as the Browns’ best off-ball ‘backer and a top-30 player at the position. This injury should affect his market, however. With Takitaki (28 in June) on the older end for a first-time free agent, this is a tough setback.

Cleveland still has Jones and Jeremiah Owusu-Koramoah healthy. Despite his pedigree, the longtime Falcons starter has worked mostly as a backup since the October trade. Although Jones has started two games with Cleveland, he has yet to exceed 20 snaps since his most recent start (Week 10). More should be needed from the seventh-year defender following the team’s latest linebacker injury, but second-year ‘backer Tony Fields has started the past two games. He played a career-high 33 defensive snaps against the Texans.