The Patriots surprisingly opted not to draft a quarterback this weekend, but they’ve now signed a pair of passers who went undrafted. New England has inked former Michigan State quarterback Brian Lewerke to a free agent deal, his agent Mike McCartney tweeted. 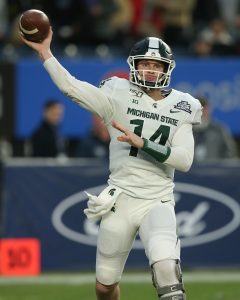 The Patriots agreed to terms with former Louisiana Tech signal-caller J’Mar Smith last night. Lewerke had a bumpy career in the Big Ten, to say the least. He showed flashes of brilliance as a sophomore and was buzzed about as a potential future early draft pick, leading to a lot of excitement heading into 2018. A shoulder injury derailed that campaign, and his stats were awful when he was on the field as he threw 11 interceptions and only eight touchdowns while completing just 54.3 percent of his passes.

He bounced back a bit this past season but still wasn’t great, finishing with 17 touchdowns and 13 interceptions. He finished with a career 57.7 percent completion percentage, and never had a year above 59.6. He’s pretty mobile however, as he finished last year with 363 rushing yards and another three scores.

Another thing working in Lewerke’s favor is that he at least had the largest hands of any quarterback at the combine, clocking in at 10 5/8 inches. The Pats have very little certainty at the position, with Jarrett Stidham, Brian Hoyer, Smith, and now Lewerke on the roster. If they don’t add an established veteran like Andy Dalton or Cam Newton soon, it’s going to be a free for all whenever training camp gets underway.