Ted Larsen will receive an opportunity to join a new team and potentially play an 11th season. Following a Friday workout, the Giants signed the veteran offensive lineman.

Larsen joins the Giants after making a late-season cameo with the Buccaneers. The longtime guard’s second Tampa Bay stint did not involve similar responsibilities, with the Bucs using him as a depth piece rather than a starter, but he collected a Super Bowl ring despite not playing in the regular season. Larsen was on Tampa Bay’s active roster during the playoffs and logged 38 offensive snaps in the team’s wild-card win in Washington.

Prior to that second Tampa Bay stay, Larsen played spent time in Miami and Chicago. The Dolphins used Larsen as a regular guard starter from 2017-18, though they cut him during their 2019 rebuilding project. The former Patriots sixth-round pick did not stick in New England but has made 88 starts with the Bucs, Dolphins, Cardinals and Bears. While Larsen has been a starting center, most of his NFL experience has come at guard.

The Giants survived an early-camp scare, when starter Shane Lemieux managed to return to practice days after being carted off. Lemieux and Will Hernandez are in position to be Big Blue’s guard starters. Larsen, who is now 34, would profile as insurance.

In other Giants roster moves Friday, the team waived running back Mike Weber and defensive back Jordyn Peters.

An 88-game NFL starter, Ted Larsen has not played since last season. But he now has a path back to game action. The Buccaneers signed the 10-year veteran offensive lineman Tuesday. 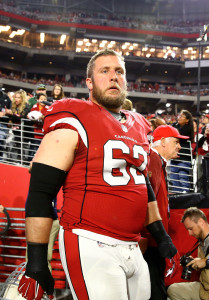 Larsen will join Tampa Bay’s practice squad, becoming the latest 30-something vet to agree to such an arrangement in this unusual NFL season. This will be a homecoming of sorts for Larsen, who played the first four seasons of his career in Tampa.

The Bucs originally added Larsen in 2010, claiming the sixth-round draft choice after the Patriots waived him, and used him as a near-full-time starter as a rookie. Larsen made 31 starts at guard and center with the Bucs during the Raheem Morris and Greg Schiano regimes but left for a Cardinals free agency deal in 2014. Larsen has since played for the Bears (two stints) and Dolphins.

Last season, Larsen started two games with the Bears and played in 12, doing so after the Dolphins made him a cap casualty as they began their rebuild. A more experienced Dolphins team featured Larsen as a full-time starter in 2018.

Tampa Bay’s offensive line lost a key component recently. A.Q. Shipley suffered what is believed to be a career-ending injury late last month. Larsen, 33, may have a chance to fill his shoes soon.