Greg Joseph will be staying in Minnesota for at least one more year. The kicker has signed his RFA tender, as announced by his agent Brett Tessler (Twitter link via Aaron Wilson of Pro Football Network). 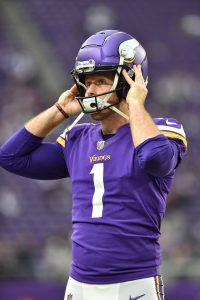 The 27-year-old has found himself on a number of both 53-man and practice squad rosters since entering the league in 2018. Originally signed by the Dolphins as a UDFA, his first action came with the Browns. He made 17 of 20 field goal attempts in Cleveland, along with 25 of 29 extra points.

He wasn’t able to retain his starting spot during the following training camp, though, which had him on the move again. After a stint on the Panthers’ practice squad, he made two appearances with the Titans. The FAU alum then spent the entire 2020 campaign with the Buccaneers; he didn’t make any appearances in Tampa Bay, but still capped off the season with a Super Bowl ring.

That led to his deal with the Vikings last offseason. Coming in as the replacement for Dan Bailey, Joseph played in all 17 games in 2021. He made 33 of 38 field goal attempts, good for a success rate of 86.8%. He also converted 36 of 40 extra points. That level of success led to the Vikings tendering him, and he will now spend multiple seasons with the same team for the first time in his career.

The kicking game was an issue for the Vikings this season, and they’re getting out ahead of the matter by bringing in a veteran early. Minnesota is signing kicker Greg Joseph, his agent Brent Tessler announced on Twitter.

Since Joseph finished the season on the Buccaneers’ practice squad and not active roster, he doesn’t have to wait until March to sign like everybody else. Undrafted out of Florida Atlantic in 2018, he originally signed with the Dolphins. After getting cut by Miami he signed with the Browns, and spent the last 14 weeks of the 2018 season as Cleveland’s kicker. In those 14 games he went 17 of 20 on field goal attempts and 25 of 29 on extra points.

He lost the job the following training camp, spent some time on the Panthers’ practice squad, and then was signed by the Titans late in the year. He was their kicker for the final couple of regular season games as well as their playoff run to the AFC Championship Game.

He didn’t appear in a game for Tampa this year, but earned a Super Bowl ring nonetheless. The Vikings had Dan Bailey as their kicker this past season, and he was a disaster at times. He had a few meltdown games, including one against none other than the Bucs where he missed four kicks. Minnesota opted not to cut him during the season, but it was a foregone conclusion that he’d face some competition in 2021.

The Vikings guaranteed a portion of Joseph’s salary, while Bailey has $1.8MM that becomes fully guaranteed on March 19th, Ian Rapoport of NFL Network tweets. As such, it wouldn’t be surprising if Bailey doesn’t even make it to camp and gets cut loose in the next couple of weeks here. 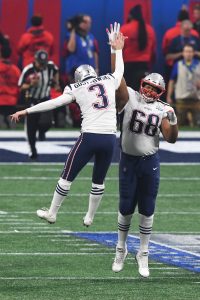 The Browns may be out of the Jadeveon Clowney sweepstakes, leaving the Seahawks and Raiders as the the arguable frontrunners for his services. But don’t count the Titans out just yet. In a Periscope/Facebook Live conversation with PaulKuharsky.com, GM Jon Robinson talked about what a useful asset Clowney would be to Tennessee’s front seven and how he would complement the talent already on the roster.

But Robinson also reiterated that he wants to have team doctors examine Clowney before he moves forward in his attempts to sign him. While Robinson acknowledged that the former No. 1 overall pick looks good from what he has seen on social media, there is obviously no substitute for an in-person evaluation.

“Anytime you are dealing with whatever the contract is going to command, you want to make sure that the player is healthy, that you are able to allow your doctors to see him, to look at it, to make sure everything is going to be good,” Robinson said.

Those comments are noteworthy in light of the fact that the Titans were previously reported to have made multiple offers to Clowney earlier this offseason. Assuming those reports were accurate, it seems as if Robinson may have been willing to bring Clowney in on a fairly low-risk deal without a medical examination, but if he is going to make a sizable commitment, he needs to be assured that Clowney is in good health.

Robinson also said that the team would consider taking a look at veteran kicker Stephen Gostkowski. The longtime Patriots stalwart was released by New England in March on the heels of a 2019 season that was largely wiped out by a left hip injury. The Titans are currently rostering Greg Joseph, whom they signed off the Panthers’ taxi squad in December, and UDFA Tucker McCann. Robinson conceded that the PK job is Joseph’s to lose, but he would be amenable to bringing in Gostkowski to provide some worthy competition.

Gostkowski, 36, said in April that he has no plans to retire, but this is the first time we’ve heard his name since then. His 87.4% field goal percentage is the fifth-best of all time.

Plagued by kicking woes this season, the Titans will add another reinforcement to this embattled position group. They are signing Greg Joseph off the Panthers’ practice squad, according to Mike Florio of Pro Football Talk (on Twitter).

Tennessee waived kickoff man Ryan Santoso earlier Tuesday but still has veteran Ryan Succop rostered. Succop is just 1-for-6 on field goals this season. As a team, the Titans are a woeful 8-for-18 on three-point tries, having used Succop, Cairo Santos and Cody Parkey in 14 games.

Joseph last kicked for the 2018 Browns, signing early in the season after Zane Gonzalez‘s rough day in New Orleans. He latched on with Carolina’s practice squad earlier this season. Joseph made 17 of 20 field goal tries last season.

This is Succop’s sixth Titans season. He began the campaign on IR. Since returning, he’s made 24 of 25 extra points but has made just one field goal in six games.

The Titans are on pace to miss more field goals than they’ve made and, per PFT, would become the first team to do so since the 1987 Vikings. Said Vikings team went 14-for-29 during a strike-shortened season that featured unsatisfactory work from both their regular kicker and three-game scab specialist.

The signing of Joseph is somewhat notable, as Panthers kicker Joey Slye missed three field goals during his team’s three-point loss to the Saints yesterday. Joseph appeared in 10 games for the Browns last year, converting 17 of his 20 field goal attempts and 25 of his 29 extra point tries. Elsewhere, Nelson Jr. is in contention for one of the best first names in the league.

Slye missed a 28-yard field goal that would have given the Panthers a three-point lead in the fourth quarter of what became a three-point loss to the Saints on Sunday. Prior to that, Slye missed two extra points.

Carolina was pondering workouts and will go with Joseph, whose Browns tenure began after Zane Gonzalez‘s rough September 2018 day in New Orleans.

Joseph made 17 of 20 field goal tries last season, the Florida Atlantic alum’s only NFL work to date. Slye is now 19-for-26 on field goals and 22-for-26 on PATs. Carolina went with Slye, a rookie out of Virginia Tech, after longtime kicker Graham Gano landed on IR.