Eagles Deal No. 164 To Dolphins

The Eagles moved down in Round 5, sending their 164th overall pick to the Dolphins. With the selection, Miami took Boise State defensive end Curtis Weaver. 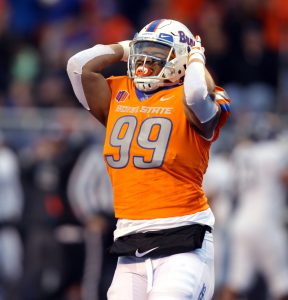 Philadelphia will slide down to No. 173 and pick up a seventh-round choice (No. 227) for doing so.

Weaver was productive as a pass rusher throughout his career, recording at least 9.5 sacks in each of his three college seasons and twice ending seasons with double-digit sacks. Weaver registered 11 as a freshman and 13.5 as a junior in 2019 and bypassed his senior season to enter the draft.

Scouts Inc. graded Weaver as a third-round talent. The Dolphins have now drafted three defensive linemen and signed two defensive ends in free agency. Weaver will attempt to carve out a role on a team that now employs Shaq Lawson and Emmanuel Ogbah. The Dolphins also have former first-rounders Charles Harris and Taco Charlton.

Curtis Weaver is going pro. This week, the Boise State outside linebacker announced that he will enter the 2020 NFL Draft and forgo his senior season.

“I came here as a fat boy and I’m leaving as a young man,” Weaver announced on social media. “I poured my heart and soul into Boise State Football every time I set foot onto the field. I am forever grateful and honored to be a Bronco.”

After notching 52 tackles, 13.5 sacks, one interception, and one forced fumble, most expected Weaver to make the jump. He leaves Boise State with 34 career sacks and a strong chance of being a first-round pick in April.

On his latest big board, Bleacher Report’s Matt Miller slotted Weaver as the biggest riser of any edge rusher, though he has him ranked behind eleven other edge players. Other analysts are higher on him – ESPN’s Mel Kiper Jr. has him ranked as the second-best outside linebacker in this year’s class. Meanwhile, ESPN’s Todd McShay had him going No. 20 overall in his latest mock draft.

Ohio State’s Chase Young, who is also expected to skip his final year of eligibility, is universally considered to be the best edge rusher in this year’s class.