The Raiders’ right tackle competition has seen an unfortunate development. Per a team announcement, projected starter Brandon Parker has been placed on injured reserve, ending his 2022 season. 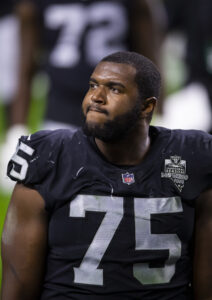 The 26-year-old was in line to operate with the first team, but suffered an injury which was recently confirmed as being serious. In his absence, Vegas had several options available as replacements, and were subsequently reported to not be eyeing a free agent addition.

Parker has starting experience dating back, primarily, to his rookie season and the 2021 campaign. He re-upped with the team in free agency on a one-year deal worth $3.5MM, a contract which would have given the team a cost-effective lineman and allowed the former third-rounder to earn a more lucrative pact next offseason. Instead, his market will be weighed down by this year-long absence.

For the past few weeks, Vegas has weighed their options at the position, which include veteran Jermaine Eluemunor, seventh-round rookie Thayer Munford and 2021 first-rounder Alex Leatherwood. The latter struggled during his rookie season, resulting in a shift to guard. He has been similarly underwhelming during this offseason, potentially leaving his roster spot in jeopardy despite his age and draft status. Indeed, the team’s braintrust – now featuring GM Dave Ziegler and HC Josh McDaniels – has explored the possibility of trading Leatherwood, per Albert Breer of Sports Illustrated.

Between that possibility and a minor ailment for Munford, Eluemunor can be considered the RT favorite at least to start the season. Especially given the expectations surrounding the Raiders, though, that spot (along with the 0-line as a whole) will be heavily scrutinized, particularly if Vegas holds firm on using internal options to replace Parker.

The team also confirmed on Sunday that defensive tackle Tyler Lancaster and linebacker Tae Davis have been placed on IR. Lancaster had been a rotational presence throughout his four-year Packers tenure before signing in May; Davis, meanwhile, primarily played on special teams with the Giants and Browns to begin his career. He missed the 2021 campaign, and had recently been released by the Texans.

One comment on “Raiders RT Brandon Parker Out For Season”