SEPTEMBER 6: While the issue affecting the veteran lineman’s availability remains a mystery, it is far from certain he comes back when first eligible. Vaitai is not a lock to play in 2022, according to NFL.com’s Ian Rapoport (on Twitter). Kraemer will be Detroit’s right guard starter, according to the official depth chart the team released Tuesday morning.

SEPTEMBER 5: Halapoulivaati Vaitai‘s third Lions season will not begin on time. The veteran offensive lineman is now on Detroit’s IR, mandating a four-game absence. The nature of Vaitai’s injury is unkonwn. 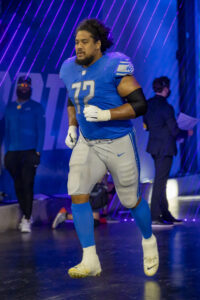 The well-paid blocker is expected to return as the Lions’ right guard starter, but the team will need to make other plans for its September slate. This will be Vaitai’s second IR trip since he signed with the Lions in 2020. The team also claimed guard Drew Forbes off waivers from the Browns on Monday.

A former Eagles draftee, Vaitai missed six games in 2020 due to a foot injury but returned to play in 15 last year. Vaitai, 29, represents part of a Lions source of optimism; both he and left guard Jonah Jackson ranked as a top-30 guards (per Pro Football Focus) in 2021. Along with former first-rounders Taylor Decker, Frank Ragnow and Penei Sewell, the Lions are expected to field one of the league’s top O-lines.

Detroit’s fill-ins from 2020 are no longer on the roster, though Forbes is now in the mix. The team now rosters four backup interior O-linemen — a group that also includes 2020 fourth-rounder Logan Stenberg, fifth-year veteran Evan Brown and 2021 UDFA Tommy Kraemer. Brown served as Ragnow’s primary backup last season, and Kraemer made three starts in 2021. Neither Forbes nor Stenberg has started a regular-season game.

All eight players have tested positive for the virus (Twitter link via NFL.com’s Tom Pelissero), putting their availability in doubt. Still, as of this writing, the game is still slated to go ahead as planned on Saturday (Twitter link).

On Monday alone, 36 NFL players — including Chargers tackle Rashawn Slater — were placed on the COVID-19/Reserve list. Since then, the league has issued a memo requiring booster shots for all Tier 1 and 2 staff by Dec. 27. While players are not required to be vaccinated, coaches and trainers fall within Tier 1.

The Browns were already down three players on Sunday, including tight end David Njoku, thanks to the reserve/COVID-19 designation. Despite that, they still managed to beat the Ravens and advance to 7-6 on the year.

The Browns became the second team to move their roster down to the required 53-man max. They began paring their roster to the regular-season limit Monday. While waiver claims could change the equation, here are the cuts Cleveland made to reach 53 Tuesday:

Absent from these cuts are two defensive line reclamation projects. Both Takk McKinley and Malik McDowell have made the team. The latter’s journey back represents the latest step in a long road. McDowell saw an ATV accident during his first NFL offseason sidetrack his career. Prison time followed for a DUI arrest from 2019. The No. 35 overall pick in 2017, McDowell has never played a regular-season game. McKinley bounced around last year, being jettisoned from the Falcons, Bengals and 49ers. The former first-round pick later landed on the Raiders’ IR list but caught on with the Browns this year.

Hodge should be expected to stay in Cleveland via the practice squad, but the Browns have a deep receiver group. A Browns backup wideout in 2019 and ’20, Hodge has 15 catches for 256 yards as a member of the team. The Browns added Lee last year, using him in eight games as a backup and special-teamer. He is a vested veteran and will avoid waivers. All eight members of the Browns’ 2021 draft class made the roster.

The Browns have released wide receiver Antonio Callaway, per a club announcement. Meanwhile, Callaway is facing, and appealing, a ten-game suspension for another violation of the NFL’s substance abuse policy, sources tell NFL.com’s Ian Rapoport (on Twitter). While that’s a major factor in the team’s decision to cut him, Rapoport hears that it is not the only reason the team waived him. 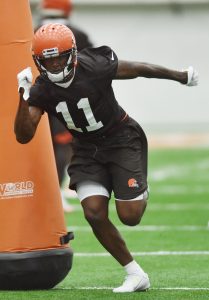 The Browns drafted Callaway in the fourth round of the 2018 draft, opting to roll the dice on an extremely talented player who had multiple red flags off the field. At times, that talent has shown. Last year, he clicked with Baker Mayfield and finished out with 43 catches for 586 yards and five touchdowns. This year, however, his off-the-field problems reappeared – the NFL suspended Callaway for the first four games of the year after violating the substance abuse policy and he’s now looking at an additional ten-game ban.

The Browns benched Callaway against the Bills on Sunday for reasons that head coach Freddie Kitchens did not disclose. Days later, Callaway is out of a job. Per league rules, he’ll hit the waiver wire as a post-trade deadline cut. In his four games this year, Callaway registered eight catches off of 15 targets for 89 yards and zero TDs.

In a related move, the Browns have activated offensive lineman Drew Forbes. Forbes, a sixth-round pick, is now set to debut after recovering from a knee injury suffered late in the offseason.