Jamize Olawale opted out of last season due to COVID-19 concerns. He will now need to find a new team. The Cowboys released the veteran fullback Wednesday. 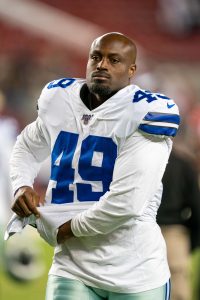 The move will free up a bit of cap space ($1.1MM) but leave Dallas with more in dead money ($1.2MM). The Cowboys previously extended Olawale in 2019, signing him through the 2021 season.

An eight-year veteran whom the Cowboys acquired from the Raiders in 2018, Olawale plans to play next season, according to the Dallas Morning News’ Michael Gehlken (on Twitter).

While it will not be a lock Olawale catches on elsewhere, considering he plays a fringe position and will turn 32 next month, he has managed to sign a few NFL contracts. The Raiders landed Olawale as a UDFA in 2012 and extended him in 2015. He did not make it to Year 1 of the team’s Jon Gruden regime, being traded to Dallas during an offseason that sent Cowboys fullback Keith Smith to the Raiders. The Cowboys re-signed Olawale to a three-year, $5.4MM deal in March 2019.

This move comes after the Cowboys restructured the contracts of Tyron Smith, Zack Martin and La’el Collins, creating around $17MM in cap space.

The Cowboys have picked up the 2020 option for fullback Jamize Olawale, as Field Yates of ESPN.com tweets. Olawale joined the Cowboys two years ago via trade with the Raiders and has been a key special teams piece ever since.

In Oakland, Olawale was used to clear the way as a lead blocker. The Cowboys brought him in to take over for Keith Smith who, strangely enough, signed on with the Raiders in the same offseason.

Soon after the trade, the Cowboys gave Olawale a new three-year, $5.4MM deal with $2.8MM guaranteed, though the 2020 and 2021 seasons were left as option years. The Cowboys had to decide on those seasons before the end of the ’19 league year, and that’s what they did today.

Olawale, 31 in April, has 109 career appearances to his credit with 20 starts for the Raiders and Cowboys. He has not registered a carry since 2017 and did not catch a pass in 2019, though he was targeted twice on throws. 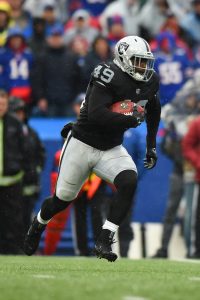 The Raiders have traded fullback Jamize Olawale to the Cowboys, Ian Rapoport of NFL.com tweets. The Raiders will send a sixth-round pick to the Cowboys in the deal in exchange for a fifth-rounder.

Olawale was originally signed by Oakland off of Dallas’ practice squad. He has been with the Raiders since 2012, but he’s now headed back to Dallas to take over for Keith Smith, who signed with the Raiders earlier this month. In essence, the Raiders and Cowboys have swapped fullbacks, but in a slightly more complicated fashion.

Olawale, 29 in April, has been primarily used as a blocker in Oakland. Over the last three seasons, he has just 55 carries for 200 yards and four touchdowns. He hasn’t been a huge factor as a receiver either with just 27 grabs for 344 yards and one score in that span.

Trading Olawale takes $1.6MM off of Oakland’s cap. Meanwhile, they’ve also turned a sixth-round pick into a fifth-round pick in a deal that echoes this week’s Cordarrelle Patterson trade with the Patriots.

WEDNESDAY, 10:52am: Having avoided restricted free agency this offseason, Olawale got a signing bonus of $760K on his new deal, with a $1.14MM roster bonus in 2016, tweets Ian Rapoport of NFL.com. According to Rapoport, the extension is worth $6MM in total.

TUESDAY, 4:51pm: The Raiders signed fullback/running back Jamize Olawale to a three-year contract extension Tuesday, according to the team’s website. Financial terms of the deal have not yet been disclosed.

Olawale, who went undrafted out of North Texas, joined the Raiders as a rookie in 2012 after they plucked him from the Cowboys’ practice squad. Olawale has since emerged as a key special teamer for the Raiders and has figured more into their offense this season, racking up career highs in touches (32) and total yards (180). He has also added a touchdown, giving him three for his career.

The Eagles are considered the favorites to land Mark Sanchez, and it’s hard to determine which other teams may be a threat to Philadelphia for the signal-caller. The Seahawks have been ruled out as a destination, and reported interest from the Rams and Giants has been significantly downplayed. Now, Terry McCormick of TitanInsider.com suggests that another rumored suitor isn’t seriously in the mix, tweeting that the Titans don’t have interest in bringing Sanchez aboard. As we wait to see where the former Jet lands, let’s check out a few more notes from around the AFC….

We’ve already passed along one round of free agent rumors this afternoon, but with the 2014 FA period just a few days away from officially getting underway, there will be plenty more items to track in the near future. In fact, we’ve already got another handful of updates to run through: