The Saints will be without a well-respected part of their defense and locker room once again for the 2022 season. The team announced on Friday that veteran linebacker Craig Robertson has retired.

The 34-year-old played nine seasons in the NFL, beginning with four years in Cleveland. He topped 85 tackles in each of the first three seasons in that stretch, showing a knack for generating takeaways as well. After one more year with the Browns, he signed in New Orleans in 2016. That year was the one in which he set a new career-high in tackles (115), adding two fumble recoveries and an interception.

His play earned him a second deal with the Saints, where he brought his career total in games played up to 136, including 65 starts. His defensive playing time declines, as he transitioned into primarily a special teamer. After not suiting up in 2021, the former UDFA is hanging up his cleats for good. Robertson described his time in the league as “a blessing”.

“Craig was a fantastic player, leader and a consummate professional throughout his time with the New Orleans Saints”, general manager Mickey Loomis said. “It was a pleasure watching Craig’s passion, toughness and leadership ability on the field, in our locker room and in our community”.

New head coach – and Robertson’s defensive coordinator during his time there – Dennis Allen added, “Craig was everything that you look for in a player, smart, hard-working and versatile… I congratulate Craig for what he achieved in his NFL playing career and thank him for his contributions to the New Orleans Saints”.

Without Robertson, the Saints will carry on with the likes of Demario Davis, Pete Werner and Zack Baun in their middle linebacking corps. Both on and off the field, though, they will certainly miss his presence.

The Saints are keeping linebacker Craig Robertson, according to Mike Garafolo of NFL.com (on Twitter). He’ll return on a two-year deal worth more than $4MM.

Like safety Chris Banjo, Robertson is a key special teams player for New Orleans. Banjo himself received a new deal from the Saints this week, a three-year extension worth $9MM.

Robertson was not believed to be a priority for the Saints heading into this week, but they still found the room to keep him on an inexpensive deal. Moving forward, the Saints’ top priorities are expected to be at tight end, defensive tackle, and backup quarterback.

FRIDAY, 3:14pm: The Saints have officially announced their three-year deal with Robertson (via Twitter).

WEDNESDAY, 8:54am: The Saints and Robertson are in agreement on a three-year contract, reports Adam Schefter of ESPN.com (via Twitter). The deal isn’t official yet, but word of the agreement comes as no surprise after Payton talked this morning as if Robertson would be on the team.

TUESDAY, 6:43pm: The Saints and free agent linebacker Craig Robertson are “working on” a deal, and head coach Sean Payton expects it to get done, according to Mike Triplett of ESPN.com (Twitter link). Katherine Terrell of NOLA.com corroborated Triplett’s report (on Twitter).

If the Saints sign Robertson, he’ll be the second notable addition to their linebacking corps since last week. New Orleans 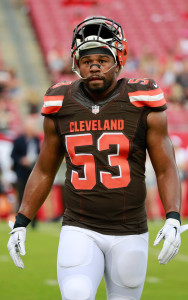 previously picked up James Laurinaitis, who is clearly the more established of the two. Nevertheless, Robertson has had a productive four-year career, all of which has been spent in Cleveland, and easily outdid Laurinaitis by Pro Football Focus’ standards last season. The site ranked Robertson 37th and Laurinaitis 83rd in overall performance among 97 qualifying linebackers.

For his career, Robertson – a former undrafted free agent from North Texas – has appeared in 58 of a possible 64 games and made 37 starts. Nine of those starts came in 2015, when Robertson amassed 59 tackles, a forced fumble and an interception in 12 appearances. Prior to that, Robertson racked up 85 or more tackles in three straight campaigns, including a personal-best 99 in 2014. He also has six career INTs.

Robertson was an inside linebacker in Cleveland, but the Saints already have both Laurinaitis and Stephone Anthony as middle men. It’ll be interesting, then, to see how the club deploys those three (if it signs Robertson) – not to mention OLBs Hau’oli Kikaha and Dannell Ellerbe.

ESPN’s Adam Schefter has a trio of re-signings (via Twitter): running back Matt Asiata (Vikings), wide receiver Jeremy Ross (Lions) and linebacker Craig Robertson (Browns). Each player signed an exclusive rights free agent tender to stay with their respect teams. The trio was solid in 2013; Asiata ran for 166 yards on 44 carries, Ross had six receptions and six kick returns and Robertson compiled 85 tackles.

Let’s take a look at some more free agent rumors…