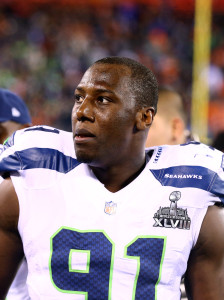 Clemons, 34, saw action with five different teams during his 12-year NFL career, but his most productive seasons came in Seattle. After going undrafted out of Georgia in 2003 and then combining for 20 sacks in stints with the Redskins, Raiders and Eagles over the first five years of his career, Clemons joined the Seahawks in 2010 and went on to collect 38 sacks in a four-season span. Clemons totaled at least 11 sacks in each individual season from 2010-12, also forcing seven fumbles during that period.

The Seahawks, with whom Clemons missed only two of a possible 64 regular-season games, released him at the conclusion of their Super Bowl-winning 2013-14 campaign. He subsequently became a member of the Jaguars, with whom he tallied 11 sacks and five forced fumbles in all 32 regular-season games from 2014-15. Most of Clemons’ production (eight sacks, four forced fumbles) in Jacksonville came in 2014. His play fell off so significantly last season that Pro Football Focus ranked him dead last among 110 qualifying edge defenders.

Clemons’ struggles in 2015 caused the Jaguars to release him in March. He then rejoined the Seahawks on a one-year, $1.5MM contract in April, but Clemons has decided nearly four months later to walk away from the sport. In 163 career regular-season games (85 starts), Clemons amassed 276 tackles, 69 sacks and 18 forced fumbles. PFR wishes him the best in his retirement.

Chris Clemons‘ one-year deal worth $1.5MM indicates he’ll have to compete for a spot on the Seahawks‘ roster despite his ties with the organization, Sheil Kapadia of ESPN.com reports.

Only Clemons’ $150K signing bonus is guaranteed, with the returning defensive end’s status possibly tied to what the team does in the draft later this month. Kapedia identifies the 34-year-old Clemons as a candidate to back up Cliff Avril at the hybrid LEO defensive end spot, with Frank Clark expected to step into Bruce Irvin‘s right-side role.

Clemons did not fare as well with the Jaguars as he did under Gus Bradley and Dan Quinn in Seattle, registering just three sacks in seven starts in 2015. However, the well-traveled veteran had shown consistency prior to last year. Playing in 16 regular-season games in eight of the past nine seasons, Clemons collected eight sacks in 2014 after posting double-digit numbers in that category from 2011-13 in Seattle.

The one-year pact includes $12,500K in active-roster bonuses, along with a $150K workout bonus, Aaron Wilson of the Houston Chronicle reports (on Twitter).

Here’s some more from the NFC on Sunday night.

The Seahawks announced that they have signed defensive end Chris Clemons. The deal is a homecoming of sorts for the 34-year-old who spent 2010-2013 with Seattle.

Clemons will turn 35 in October and wasn’t productive in 2015, but overall he has a history of playing at a high level. His three sacks were his lowest total since he became a starter in 2010, and a major step down from the eight he recorded in his first year in Jacksonville. Pro Football Focus ranked Clemons dead last among 110 qualified edge defenders. In early March, the Jaguars parted ways with Clemons to clear his entire $4MM cap number for 2016 from their books. Jacksonville wasn’t on the hook for any dead money, so the move was something of a no-brainer for them.

Clemons recorded at least 11 sacks in his first three seasons with the Seahawks, but recovery from a torn ACL slowed him down in 2013, resulting in just 4.5 sacks and a -7.7 grade from Pro Football Focus, which placed him 42nd among 52 qualified 4-3 defensive ends.

Quarterback Mark Sanchez was traded to the Broncos yesterday, but if the veteran had had his way, he would have ended up in Denver years before.

According to Manish Mehta of the New York Daily News (on Twitter), Sanchez wanted to play for the Broncos following his release from the Jets in 2014. The play-caller wanted to learn from future Hall of Famer Peyton Manning, but the presence of Brock Osweiler essentially prevented Sanchez from joining the organization. Instead, he landed with the Eagles on a one-year, $2.25MM deal.

After being released recently by the Jaguars, veteran edge defender Chris Clemons is expected to pay a visit to the Seahawks soon, and could sign with the team during that visit, according to Bob Condotta of the Seattle Times (via Twitter). In fact, Condotta suspects that Clemons will sign.

If it happens, it would be a reunion for the two sides, as Clemons enjoyed the best years of his NFL career in Seattle. Although he was slowed down by injuries during his final year with the team in 2013, he recorded at least 11 sacks as a 16-game starter in each season from 2010 to 2012. At age 34, Clemons is unlikely to reach those totals again, but he could be a solid situational pass rusher if he rejoins the Seahawks.

After releasing guard Zane Beadles earlier this afternoon, the Jaguars have also confirmed the release of a veteran player on the other side of the ball. According to a team release, Jacksonville has parted ways with defensive end Chris Clemons. 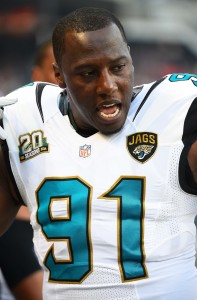 Clemons will turn 35 in October and wasn’t productive in 2015, making him a logical candidate to be released this offseason. His three sacks were his lowest total since he became a starter in 2010, and a major step down from the eight he recorded in his first year in Jacksonville. Pro Football Focus ranked Clemons dead last among 110 qualified edge defenders.

Like Beadles, Clemons had no dead money left on his contract, so the Jaguars will clear his entire $4MM cap number for 2016 from their books. Between the two players, Jacksonville creates another $9.5MM in cap savings, adding to the team’s league-high cap room. The Jags now have a staggering $85MM or so in projected cap space, with the new league year around the corner.

While the Jaguars have maintained that they don’t expected to go wild in free agency, the team certainly has the flexibility to be serious contenders for virtually any player on the market. Bruce Irvin, Alex Mack, and Olivier Vernon are a few of the top-tier free agents who would be nice fits in Jacksonville.

In his look at the Colts‘ top five priorities for training camp, Stephen Holder of the Indianapolis Star suggests the team needs to solidify its offensive line and attempt to work out some contract extensions within the next few weeks. Although the Colts have been mentioned as a potential suitor for Evan Mathis, they have no plans to sign him, preferring instead to work on developing their long-term pieces on the line, says Holder. He also notes that extension discussions between T.Y. Hilton and the Colts have re-opened, which could be a promising soon as the wide receiver enters a contract year.

Here’s more on the Colts and their division rivals:

As expected, veteran pass rusher Chris Clemons reported to the Jaguars today, tweets Ryan O’Halloran of the Florida Times-Union. Clemons hadn’t been present for Jacksonville’s voluntary OTAs this year, but would have forfeited his workout bonus if he hadn’t shown up this week. More from the AFC..