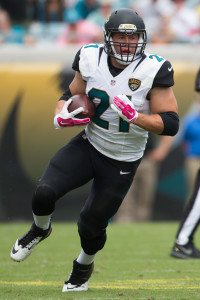 THURSDAY, 9:41am: The Jaguars’ deal with Ivory is now official, tweets John Oehser of Jaguars.com.

7:04am: Per Rapoport (via Twitter), Ivory’s new deal with the Jaguars will be a five-year contract. Rapoport reiterates that it’s worth “well north” of $6MM annually.

TUESDAY, 8:59pm: The Jaguars have agreed to sign running back Chris Ivory, according to Adam Schefter of ESPN.com (Twitter link). Ivory will be able to officially sign with Jacksonville on Wednesday. The deal is worth “well above” $6MM per year, tweets Ian Rapoport of NFL.com. 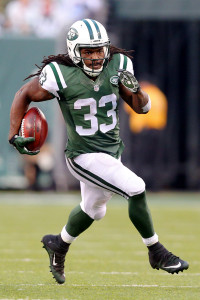 Ivory, 28 later this month, has been a popular name since the legal tampering period began on Monday. The former Jets running back has been linked to a number of clubs, as the Texans, Buccaneers, and Raiders have all expressed interest.

Instead, Ivory will head to the Jaguars, not a club that many pegged to land Ivory, or for that matter, any free agent running back. Jacksonville selected T.J. Yeldon in the second round last season, and the rookie was pretty impressive, averaging 4.1 yards per carry and scoring twice in 12 starts. The Jaguars also have Denard Robinson on their depth chart, and he’s shown to be a more than capable backup.

But the Jags will turn to a more proven commodity in Ivory, who last season topped 1,000 yards rushing for the first time in his six-year career. A runner who exhibits terrifying force, Ivory averaged 4.3 yards per carry and reached the endzone seven times last season. He even helped out in the passing game, posting 30 receptions, 12 more than his previous career high.

Ivory was PFR’s No. 4 free agent running back, and he was expected to compete on the open market with the likes of Doug Martin, Lamar Miller, and Matt Forte. None of that trio has yet agreed to sign with another club, though all three have been heavily linked to potential suitors.

The Jaguars, who entered the legal tampering period with more $80MM in cap space, are certainly showing their financial strength. In addition to agreeing to terms with Ivory, Jacksonville has also agreed to sign defensive lineman Malik Jackson to a six-year deal worth more than $15MM annually.

Ivory’s presence on the roster has already affected another Jaguars running back — per Rapoport (Twitter link), Jacksonville will release Toby Gerhart tomorrow.

Toby Gerhart‘s disappointing tenure with the Jaguars has likely come to an end, as the running back has been placed on the injured reserve, reports Ian Rapoport of NFL.com (via Twitter). To take his spot on the roster, the team has promoted wideout Rashad Lawrence from the practice squad (via Ryan O’Halloran of Jacksonville.com).

The 28-year-old certainly hasn’t lived up to the three-year, $10.5MM contract he signed with the Jags in 2014. After having rushed for 326 yards on 101 carries in 2014 (resulting in a career-low 3.2-yards per carry), the veteran has only compiled 49 all-purpose yards in seven games this season. Based on his lack of production, the team will presumably cut the running back following this season, opines O’Halloran.

Prior to his tenure in Jacksonville, Gerhart was a competent backup for the Vikings behind Adrian Peterson. His best season came in 2011, when he finished with 531 rushing yards and another 190 yards through the air.

Lawrence, a rookie out of Northwestern, joined the Jaguars practice squad in early September.

We took a look at ESPN’s NFC mailbags earlier this morning. Let’s now check out some notes from the AFC…

It’s Saturday morning, and that means ESPN’s NFL writers are answering questions from readers. Let’s take a look at some of the notable tidbits from the AFC…

As Joseph Person of the Charlotte Observer writes, “the seal was broken” on extensions for 2011 first-round draft picks–the inaugural group of first-rounders under the new CBA–when Patrick Peterson and Tyson Smith recently signed new long-term, big-money deals. Given the extensions for those high-profile franchise cornerstones, Person wonders when the Panthers will look to extend quarterback Cam Newton.

Of course, Carolina picked up Newton’s option for 2015 back in April, so they have time to get a deal done. The team might also be wise to wait and see how Newton’s surgically-repaired left ankle responds this year. However, if Newton enjoys the same type of success in 2014 that he did in 2013, he will really drive up his price tag, especially since Newton’s supporting cast appears weaker this season.

Former NFL agent Joel Corry does not believe the new deals for Smith and Peterson will “open the floodgates” for their fellow 2011 first-rounders, and he expects the Panthers and Newton to strike an agreement on an extension after the end of the 2014 campaign but before training camp opens in 2015. It remains to be seen what that extension will look like, but an average annual value of $20MM seems to be the new starting point for signal-callers of Newton’s caliber.

Now for some more links from the league’s Big Cat franchises: