Shaq Lawson is back in Buffalo. On Thursday, the edge rusher agreed to a one-year deal with the Bills (Twitter link via NFL.com’s Tom Pelissero). 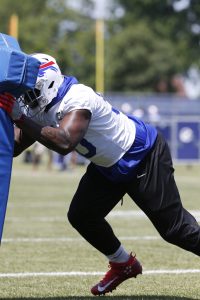 Lawson, 27, was a first rounder of the Bills back in 2016. He racked up 16.5 sacks during his four-year stay in Buffalo, which wasn’t enough for the team to pick up his fifth-year option. He stayed in the division when he signed with the Dolphins in 2020 on a three-year, $30MM deal. His production was essentially on par with his days in Buffalo, though, and he found himself being traded to the Texans one year later.

Lawson never played in Houston, however, being moved once again later that offseason, this time to the Jets. In New York, he managed just one sack and was let go before the end of the campaign. Over his six years in the NFL, he has established himself as a capable rotational pass rusher, and a return to Buffalo could allow him to get back to his old form.

The Bills, meanwhile, get to bolster their pass rush despite a limited budget. Much of their cap room has been allocated towards Von Miller, who will team with Lawson up front.

The Bills may soon be welcoming back a familiar face. There is “mutual interest” in a return to Buffalo between the team and edge rusher Shaq Lawson according to ESPN’s Jeremy Fowler (Twitter link). 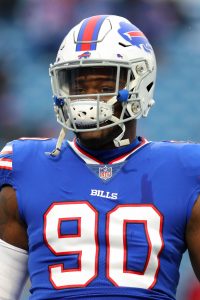 Lawson, 27, was a first rounder of the Bills in 2016. He racked up 16.5 sacks during his four-year stay in Buffalo, which wasn’t enough for the team to pick up his fifth-year option. He stayed in the division when he signed with the Dolphins in 2020 on a three-year, $30MM deal. His production was essentially on par with his days in Buffalo, though, and he found himself being traded to the Texans one year later.

Lawson never played in Houston, however, being moved once again later that offseason, this time to the Jets. In New York, he managed just one sack and was let go before the end of the campaign. Over his six years in the NFL, he has established himself as a capable rotational pass rusher, and a reunion in Buffalo could return him to his most productive form.

Fowler notes that “nothing is imminent” as of now, which is understandable given that the Bills are currently projected to be over the cap by roughly $2MM. Still, the team could likely find room to fit in the veteran without much issue. If they do, he would add an experienced presence to one of the AFC’s best rosters.

Added as an 11th-hour replacement for the injured Carl Lawson, Shaq Lawson will not finish the season with the Jets. The Jets are cutting ties with the veteran defensive end. 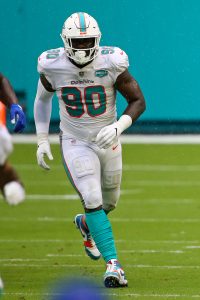 While Shaq Lawson has not been especially productive this season, he does have extensive experience as a key pass-rushing weapon. Because Lawson is being jettisoned after the trade deadline, he will head to waivers. Should Lawson be claimed, he will not be eligible to play in the playoffs. If no team claims him, however, the sixth-year pass rusher could still play for another team in the postseason as a free agent signing.

The Jets will save $9MM in cap space because of this move. That can be rolled over to their 2022 budget. Gang Green is now projected to possess more than $55MM in 2022 cap space, though many moves will take place between now and when free agency opens in March.

A former Bills and Dolphins starter, Lawson was traded twice this year. The Texans acquired him from the Dolphins, and the rebuilding team sent the veteran edge defender to the Jets late this summer. The former first-round pick has just one sack in 14 games this season. Saturday’s transaction will give Lawson a chance to be with four teams over the past year.

The former Clemson standout registered 6.5 sacks in his 2019 contract year with the Bills, catching the attention of the Dolphins in free agency. Miami signed Lawson to a three-year, $30MM deal in March 2020. The Texans reworked that contract last year. Lawson is signed through 2022; that deal carries an $8.9MM base salary next season.

On Sunday, the Texans agreed to trade edge rusher Shaq Lawson to the Jets (Twitter link via NFL.com’s Ian Rapoport). In exchange, New York will send a sixth-round draft pick to Houston.

Lawson came to Houston earlier this year in the deal that sent inside linebacker Benardrick McKinney to Miami. He turned in a solid, if unspectacular, 2020 campaign with the Dolphins. Previous to that, Lawson recorded a career-high 6.5 sacks for the Bills in 2019. For his career, Sack-a-Shaq has 20.5 sacks across five pro seasons.

The Jets will now take on Lawson and the rest of his contract. That means a paltry $1.4M in 2021 plus club control in 2022 with no guaranteed money. So, if Lawson is a bust, the Jets can drop him without penalty. And, if things work out, they can keep him for ’22 for a $8.9MM salary. It’s a savvy move for Joe Douglas & Co. — they gave up very little to fortify their defensive line in the wake of Carl Lawson‘s season-ending Achilles tear.

Lawson might not be a world-beater, but he was probably their best option after losing C. Lawson and Vinny Curry in a short span.

“It’s always easy to play the fictional game of, ‘Let’s go get somebody,’ but the reality is [it’s] few and far between in terms of what’s available,” head coach Robert Saleh said recently. “Now, obviously, Joe and his staff are working relentlessly, always trying to look at the roster and always communicating.”

Lawson has a little over two weeks to cram on his new team’s playbook. The Jets kick off the 2021 season on Sept. 12 when they face the Panthers in Carolina.

The Texans have converted $7MM of Shaq Lawson‘s contract into a signing bonus, as Field Yates of ESPN.com tweets. The move will carve out $5.2MM in breathing room for Houston while adding

Lawson arrived a couple weeks back in the trade that sent inside linebacker Benardrick McKinney to Miami. He was the second player from Miami’s 2020 front-seven spending spree to be jettisoned in a matter of days, following the release of Kyle Van Noy.

Lawson turned in a solid, if unspectacular, 2020 campaign with the Dolphins. Previous to that, Lawson recorded a career-high 6.5 sacks for the Bills in 2019. For all intents and purposes, Lawson’s is set to continue on the three-year, $30MM he inked with the ‘Fins last spring. But, thanks to those voidable years, the Texans can kick the can down the road a bit.

The Dolphins and Texans are in agreement on a trade that will send inside linebacker Benardrick McKinney to Miami in exchange for outside linebacker Shaq Lawson, as Adam Schefter of ESPN.com was first to report (via Twitter). Cameron Wolfe of ESPN.com reports that the Dolphins will send their 2021 sixth-round pick to Houston and will get the Texans’ 2021 seventh-rounder in return (Twitter link). 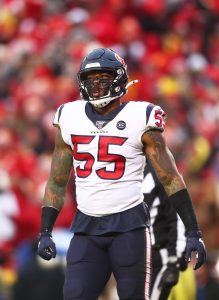 Lawson is the second player from Miami’s 2020 front-seven spending spree to be jettisoned over the last few days. After the ‘Fins failed to find a trade partner for Kyle Van Noy, they cut him loose after just one season in South Beach. Now, Lawson will try to build on a solid, if unspectacular, 2020 season with his third pro team.

The Texans, who parted ways with franchise icon J.J. Watt this offseason, were in desperate need of pass rush help, and Lawson graded out as Pro Football Focus’ 28th-best edge defender out of 109 qualified players (incidentally, new teammate Whitney Mercilus was at the very bottom of that list). Lawson’s four sacks and 25 QB pressures won’t make headlines, but he will be a welcome addition to the club’s pass rushing corps just the same. He will likely shift back to defensive end in new DC Lovie Smith‘s scheme.

Miami, meanwhile, adds a starting-caliber ILB to line up next to Jerome Baker. McKinney played in just four games in 2020 due to a shoulder injury, but he had been pretty durable up to that point. A full-time starter since he entered the league as a second-round pick in 2015, the Mississippi State product averaged 107.5 tackles per season from 2016-2019 and earned a Pro Bowl nod in 2018. But the Texans recently brought in Christian Kirksey on a one-year pact, and they had given McKinney permission to seek a trade, according to Ian Rapoport of NFL.com (via Twitter).

Per Wolfe, the Dolphins have been eyeing McKinney for awhile, and he gives them a worthy replacement for Van Noy. The team is now expected to pursue pass rush help in free agency to complement Emmanuel Ogbah and Andrew Van Ginkel (Twitter link via Jeremy Fowler of ESPN.com).

From a salary cap standpoint, the trade is mostly a wash for both clubs. Lawson is due an $8.4MM salary in 2021 and $8.9MM in 2022, while McKinney is under club control through 2023 with salaries of $7MM, $8.75MM, and $9.5MM coming his way over the next three seasons. The Dolphins will have to absorb $2.7MM in dead money as a result of the deal, but all of McKinney’s guarantees have been paid out, so it will be easy for Miami to move on from him prior to the expiration of his current contract if he underperforms.

Now that these two teams have one notable trade in the books, one wonders if another deal involving a quarterback or two could be in the offing.

Devoting significant resources to retooling their offensive line, the Jets have not address their edge defender situation. Jordan Jenkins remains a free agent, but the team has not made a strong effort to re-sign their sack leader of the past two years, Ralph Vacchiano of SNY notes. As far as the bigger names out there, the Jets are still not prepared to pay up for Jadeveon Clowney and do not have Yannick Ngakoue on the front burner, Rich Cimini of ESPN.com writes. The Jets have explored an Ngakoue tag-and-trade move but are not planning to pursue the disgruntled Jaguars defensive end, Cimini adds. Gang Green will need to make multiple moves outside, however. Tarell Basham resides as the top edge rusher on the Jets roster; he registered two sacks last season.