Cowboys cornerback Kelvin Joseph was a passenger in a vehicle from which shots were fired that killed a man last month in Dallas, according to his attorney. Joseph’s attorney, Barry Sorrels, said his client did not shoot, via Michael Gehlken and Kelli Smith of the Dallas Morning News.

Dallas police arrested two in connection with the shooting that killed Cameron Ray, 20, early on the morning of March 18, Aria Jones of the Dallas Morning News reports. The Cowboys encouraged Joseph to meet with police, according to ESPN.com’s Todd Archer. That meeting occurred Friday, and the NFL is reviewing this situation.

A 2021 second-round pick, Joseph started two games for the Cowboys last season. The 21-year-old defender has not been arrested. Surveillance video revealed an altercation between two groups of friends, respectively including Joseph and Ray, last month. Shots were soon fired from an SUV as Ray and others walked to their vehicle, according to Dallas PD. Ray died in a Dallas-area hospital.

Dallas PD asked for assistance in identifying the six men involved in the disturbance, according to Gehlken and Smith. This led to Joseph being identified. Sorrels said Joseph was unarmed.

The Cowboys drafted Joseph 44th overall despite the cornerback prospect having played just 15 college games — at LSU and Kentucky — in 2018 and ’20. During an injury-marred rookie season, Joseph played 164 defensive snaps.

One of the Cowboys’ top 2021 draft picks is set to be in uniform for the first time Sunday night. Dallas activated second-round rookie Kelvin Joseph on Saturday.

Joseph had spent the first seven weeks on IR, having suffered a hamstring injury during the preseason. Chosen in Round 2 a year after the Cowboys took Trevon Diggs in the second round, Joseph represents a key long-term investment for the Cowboys’ secondary.

Although he became the 44th overall pick this year, Joseph played just 15 college games and is still 20 years old. The high-end prospect transferred from LSU to Kentucky, playing for the Tigers in 2018 and the Wildcats in 2020. He intercepted four passes with Kentucky last year and landed on the Day 2 draft radar.

The Cowboys have used Diggs and Anthony Brown as their starting corners this season. Pro Football Focus grades Brown 10th overall among corners, well above Diggs despite the latter’s NFL-leading seven interceptions. Adding Joseph to the mix stands to help the NFC East-leading squad.

Dallas also elevated defensive tackle Justin Hamilton from its practice squad but did not activate Michael Gallup from IR. Gallup has returned to practice, but the team’s talented No. 3 receiver will be sidelined for at least one more week. Gallup suffered a calf injury in Week 1.

For the second straight year, the Cowboys selected a cornerback in the second round. They came to terms with that draftee, Kelvin Joseph, on his rookie contract Thursday, Michael Gehlken of the Dallas Morning News tweets. 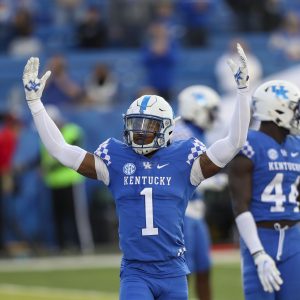 Joseph will be locked in through the 2024 season. The Kentucky product should be expected to contribute early on a retooled Cowboys defense, which now has Dan Quinn at the controls. The Cowboys went defense with their first six picks, which is understandable after the unit’s woeful 2020 showing.

Dallas gave up a franchise-record 473 points, which eclipsed the franchise’s previous high of 436 (in 2010). They ranked 28th in scoring and 23rd in total defense. The team let Byron Jones walk in free agency last year and opted against re-signing Chidobe Awuzie in March; Awuzie is now with the Bengals. The Cowboys did bring back Jourdan Lewis, however, and will pair Joseph with 2020 second-round pick Trevon Diggs. Third-rounder Nahshon Wright joins Joseph as a Day 2 arrival who will attempt to carve out an early role in Dallas.

Joseph transferred from LSU to Kentucky, playing one season with the Wildcats. He made it count, intercepting four passes and taking one back for a touchdown. The 5-foot-11 defender only played 15 games in his college career, however. After playing in six for LSU as a true freshman in 2018, he transferred and sat out 2019.

Three Cowboy draft picks remain unsigned. All were chosen in the third round, which annually produces longer negotiations due to murkier CBA language regarding rookie contracts.