This will not qualify as particularly surprising news, but the Falcons have named Marcus Mariota their starting quarterback. On the first day of training camp earlier this week, quarterbacks coach Charles London confirmed that Mariota will serve as Atlanta’s QB1, while third-round rookie Desmond Ridder will begin his pro career as Mariota’s backup. 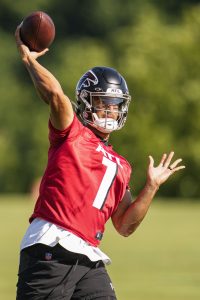 “Obviously, we’ve got a plan for each of them,” London said. “Marcus is the starter. That’s how we’re going into this thing” (via Josh Kendall of The Athletic (subscription required)).

Mariota, the No. 2 overall pick of the Titans in the 2015 draft, showed some promise during his five years in Tennessee, including a 2016 campaign in which he threw for 26 TDs against nine interceptions and rushed for 349 yards and a pair of scores. But Ryan Tannehill supplanted Mariota as the Titans’ starter midway through the 2019 season, and Mariota has spent the last two years with the Raiders as Derek Carr‘s backup.

During that time, he saw extended action in only one game, a Week 15 contest in 2020 in which he completed 17 of 28 passes for 226 yards, including a touchdown and an interception, and rushed nine times for 88 yards and a score. That performance was enough to generate trade interest the following offseason, but the structure of Mariota’s contract prevented a deal from being consummated. He ultimately remained with Las Vegas on a reworked pact, and he wound up throwing just two passes in 2021 (though he was occasionally brought in on special packages and rushed 13 times for 87 yards and a TD).

After trading franchise icon Matt Ryan to the Colts in March, the Falcons signed Mariota to a two-year, $18.75MM contract. Even after that signing, the club was said to be considering using its No. 8 overall pick on a collegiate passer, though Atlanta chose to wait until the third round to select a QB. Ridder completed just under 65% of his passes for 30 TDs and eight picks in 2021 — a season in which he took Cincinnati to the College Football Playoff — and has the chance to become the long-term answer for Atlanta under center.

He may be working with the second team as he acclimates to the NFL, but he will be getting plenty of reps. We heard last month that the Falcons would be deploying Feleipe Franks, the only other quarterback on the roster, in more of a hybrid role, and Kendall confirmed that Franks will practice as a tight end for most of camp.

Falcons To Use Feleipe Franks In Hybrid Role

Briefly thought to be the winner of the Deshaun Watson sweepstakes, the Falcons were among the teams most heavily connected to a quarterback in this year’s draft after the Browns swooped in and submitted the winning bid for Watson. Atlanta did indeed select a QB, adding Cincinnati signal-caller Desmond Ridder in the third round, and the club also signed free agent passer Marcus Mariota in March, shortly after trading franchise icon Matt Ryan to the Colts. 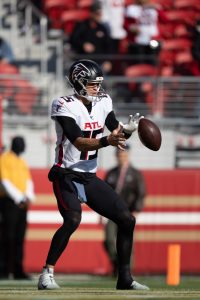 With Mariota and Ridder at the top of the first QB depth chart of the post-Ryan era, 2021 UDFA Feleipe Franks was facing long odds to see the field, at least as a quarterback. As such, the team has converted Franks to a “hybrid” player, as head coach Arthur Smith recently told reporters, including D. Orlando Ledbetter of the Atlanta Journal-Constitution (subscription required).

Franks enjoyed a successful redshirt sophomore season with Florida in 2019 and then suffered a season-ending ankle injury early in the 2020 season. He finished his collegiate career with SEC rival Arkansas, throwing 17 TDs against just four interceptions in nine games with the Razorbacks in 2021. The Falcons signed him after he went undrafted last April, and he made the roster as the third-string QB behind Ryan and Josh Rosen. He was elevated to QB2 late in the season.

While Franks will still sit in the quarterback room and take reps as a passer, he is also getting work as a tight end, where he got some practice time last season as well. At 6-6, Franks has the right height for a TE, but at 228 pounds, he is a little light relative to full-time tight ends around the league.

“Right now, it doesn’t mean that doesn’t change, but right now he’s working more at tight end than quarterback, but he also is a quarterback,” offensive coordinator Dave Ragone said.

Perhaps the Falcons are envisioning a role like the one Taysom Hill has enjoyed in recent seasons with the Saints, though Franks’ 2.2 yards-per-carry rate as a collegian is a far cry from Hill’s 5.3 YPC average, which he has replicated as a pro. If Franks is to have success as a hybrid player, it will likely be more as a receiver than as a runner.

Atlanta, of course, has 2021 first-rounder Kyle Pitts entrenched as its top tight end option, and the team has also made significant investments into the rest of its receiving corps this offseason, signing fellow TE Anthony Firkser, trading for WR Bryan Edwards, and drafting wideout Drake London with the No. 8 overall pick. So Franks will still have something of an uphill battle to make an impact as a pass catcher, but he has embraced the opportunity.

“I’m doing whatever they ask me to,” he said. “There are a lot more things I have to learn. A lot of the tight ends in the room have helped me with my route crafting and blocking. There are a ton of things I need to learn.”

Two of this year’s six Senior Bowl quarterbacks were not drafted this weekend. Both, however, now have UDFA deals. 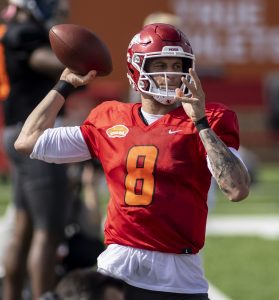 Shortly after Jamie Newman agreed to terms with the Eagles, Feleipe Franks chose the Falcons, according to his agency (on Twitter). Like Newman, Franks spent time at two different southeastern programs. He finished his career at Arkansas.

A former Florida recruit, Franks worked as the Gators’ starter as an underclassman. In 2018, he threw 24 touchdown passes compared to just six interceptions. However, an ankle injury ended his 2019 season early. Kyle Trask, who ended up going in the second round to the Buccaneers, took over the Gators’ QB1 role last year. After transferring, Franks threw 17 TD passes and just four INTs in nine Razorbacks games last season.

The Falcons have tripled their quarterback room this week. For months, Matt Ryan resided as the only quarterback on the team’s roster. A.J. McCarron and Franks now join him. The latter will reunite with ex-Florida teammate Kyle Pitts, whom Atlanta selected fourth overall.