Former first-round draft pick K’Lavon Chaisson‘s struggles in the NFL will continue for at least another four weeks as the Jaguars pass rusher is headed to injured reserve, according to Ian Rapoport of NFL Network. The LSU product is dealing with a meniscus injury suffered this past Sunday that was severe enough to warrant the extended time out. 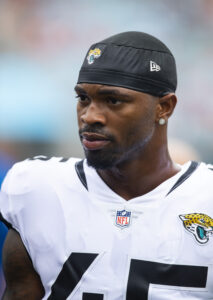 Chaisson has failed to catch on in the NFL after being drafted 20th overall in 2020. He got his most playing time as a rookie, appearing in every game and starting three. While he got five more starting opportunities in his sophomore season, Chaisson saw his snap usage plummet as, even though he started eight games, he was only on the field for over half of the defensive snaps in only two games all year. This year has seen his usage plummet even more. In four games this season, Chaisson has played more special teams than defense.

Chaisson’s waning usage is easily a result of the increasing talent of Jacksonville’s linebacking corps. No. 1 overall pick Travon Walker has played up to his value across the field from star defender Josh Allen and, after a breakout contract year in Atlanta, Foyesade Oluokun has continued to be a tackling machine. That’s not even mentioning that Walker faces some stiff competition for Defensive Rookie of the Year from his own teammate, inside linebacker Devin Lloyd. The talent-laden position group not only has Jacksonville as a top-five scoring defense but also has pushed Chaisson aside for more productive teammates.

Chaisson will be eligible to return from IR in time for a mid-November matchup with the Chiefs, but, if the injury shows any possible chance for long-term damage, the Jaguars may decide to hold him out through their Week 11 bye to give him a solid six weeks off. Regardless, Chaisson will be feeling the pressure once he returns. He will be heading into a contract year next season, but, with a $4.25MM cap hit in 2023, he may end up becoming a cap casualty before playing out the last year of his rookie contract.

After tearing his ACL in late November last season, Bills cornerback Tre’Davious White is a candidate to begin the season on injured reserve, according to Joe Buscaglia of The Athletic. This differs slightly from earlier reports this year that White may be on track to start the 2022 NFL season healthy.

White was just halfway through the second year of his four-year, $69MM extension when he suffered the noncontact injury. His absence was a tough blow for the Bills who fell just short of their second-straight AFC Championship game appearance. With White on injured reserve for at least the first four weeks of the season, Buffalo will depend on rookie first-round pick Kaiir Elam. Elam will team up with returning corners Taron Johnson, Dane Jackson, and Siran Neal to anchor a strong Buffalo secondary until White’s return.

Here are a few other rumors from around the AFC, starting with a couple of rumors from Duval County:

Trevor Lawrence made his way back from offseason shoulder surgery and progressed to working out with his Jaguars teammates during OTAs. The No. 1 overall pick, however, has run into injury trouble on a new front. Lawrence battled left hamstring tightness last week, and after attempting to return to work during the first day of Jacksonville’s minicamp Monday, he aggravated the injury, Michael DiRocco of ESPN.com notes. Urban Meyer said Lawrence will likely sit out team drills Tuesday, and it certainly would not surprise if the franchise’s QB1 is done with seven-on-seven or 11-on-11 activity until training camp. C.J. Beathard and the now-mullet-less Gardner Minshew split the reps in Lawrence’s absence.

Here is the latest out of Jacksonville:

The Jaguars became the latest team to wrap their 2020 draft class’ deals. They reached an agreement with first-round pass rusher K’Lavon Chaisson and three others to do so Monday.

Chaisson will join a revamped defensive front, one that is thin on contributors from the acclaimed “Sacksonville” era. Jacksonville traded Calais Campbell and released both Malik Jackson and Marcell Dareus in the past two offseasons. Yannick Ngakoue must play this season on the franchise tag, but the team’s top pass rusher has vowed not to return to Jacksonville for a fifth season.

Jacksonville used first-round picks on edge defenders in two straight years, with Chaisson following Josh Allen to north Florida. Chaisson broke out for the national champion Tigers last season, registering 6.5 sacks and 13.5 tackles for loss. For his career, however, Chaisson only finished with 9.5 sacks.

Luton, who played at Oregon State, will compete for a job behind starter Gardner Minshew. Considering Mike Glennon and Joshua Dobbs are on the roster, Luton profiles as a candidate for the Jags’ practice squad. Thomas (Auburn) and Claybrooks (Memphis) will attempt to impress, despite limited offseason work, in training camp to earn jobs in the Jaguars’ secondary.

While they have been rumored to be deciding on a left tackle or Isaiah Simmons, the Giants are now being connected to another name at No. 4. Strong buzz has emerged on the Giants liking LSU edge rusher K’Lavon Chaisson, Jason La Canfora of CBS Sports notes. Chaisson has not been mentioned as a top-five candidate previously, and La Canfora still mocks Tristan Wirfs to New York. But with Dave Gettleman shocking most by drafting Daniel Jones at No. 6 last year, an off-the-board pick should not be ruled out. The Giants are fairly desperate for edge rushers, having traded away Jason Pierre-Paul and Olivier Vernon in consecutive offseasons and having not re-signed 2019 sack leader Markus Golden.

Here is the latest from the draft world, with less than five hours remaining until showtime:

Another big name is on the board. On Friday, just before the deadline for underclassmen to declare, LSU linebacker K’Lavon Chaisson announced he’s going pro.

Chaisson is the latest in a line of LSU stars to declare early entry. Quarterback Joe Burrow (the expected No. 1 overall pick), center Lloyd Cushenberry III, linebacker Jacob Phillips, and safety Grant Delpit are among the eight pros that decided to skip their remaining eligibility in order to kickstart their NFL careers.

Chaisson may be one of several Tigers called in the first round. The imposing edge rusher finished out his final collegiate season with 60 tackles, 13.5 tackles for loss, 6.5 sacks, and one forced fumble. It was a big year and one that erased any questions about the 2018 season which was mostly loss due to a torn ACL.

Chaisson stands at 6’4″ and weighs in at 250 pounds, but he’s tremendously athletic for a player of his size. Some evaluators might have him slotted behind the likes of Alabama’s Terrell Lewis or Penn State’s Yetur Gross-Matos, but it wouldn’t be a surprise to see him shoot up the boards after the February combine.

Ohio State’s Chase Young is the undisputed gem of this edge rushing class (and, perhaps, the entire draft class). Iowa’s A.J. Epenesa also seems likely to come off the board early.