A minor suspension to pass along, as the league announced Tuesday that Cowboys reserve linebacker Luke Gifford had been hit with a two-game ban. 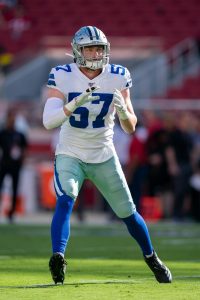 The suspension comes for violating the league’s PED policy. It won’t have a massive impact on Dallas, since Gifford doesn’t play much at all on defense. He’s mostly appeared on special teams for the six games he’s been active so far this season. He’ll be eligible to return for their Week 13 game against the Bengals.

An UDFA from Nebraska, Gifford signed with the Cowboys as a rookie in 2019 and cracked the opening roster. He was on the 53 pretty much the whole season but was often a healthy scratch, appearing in only six games then as well.

With the regular season winding down, attention across the league is understandably starting to turn toward the offseason. There are a ton of interesting storylines for 2020 free agency, and one of them is that tight ends across the NFL are about to get paid. A number of top tight ends are either going to be entering free agency or the final years of their deals, and multiple sources tell Adam Schefter of ESPN.com they will “redefine the value of NFL tight ends, and the position is about to see a major bump in the salaries paid to them.”

The 49ers’ George Kittle is going to be entering the final year of his deal and San Francisco will likely seek to work out an extension. Philadelphia’s Zach Ertz is also going to be entering a contract year, while Atlanta’s Austin Hooper will be a free agent this spring. The Chargers’ Hunter Henry and Eric Ebron of the Colts are also both slated to be free agents. Schefter writes that “few around the league believe that Kittle will play next season” still under his rookie deal, so it sounds like he’s going to land a massive extension. He’ll probably become the league’s highest-paid tight end whenever that happens. The position isn’t as deep as it used to be league-wide, but the top ones are playing huge roles on some of the NFL’s top offenses. Now, it sounds like they’re going to break the bank.

Here’s more as Week 15 comes to a close: