Jordan Phillips is moving closer to making his season debut. The Cardinals designated the veteran defensive lineman to return from IR Wednesday, starting his 21-day clock. 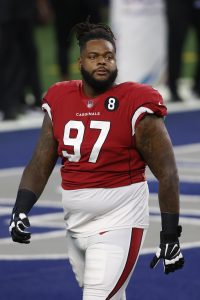 The second-year Arizona defender has three weeks to return from IR or miss the entire 2021 season. Phillips’ absence has dragged on with his current team; he has not played since Nov. 8 of last year.

The Cards did not disclose Phillips’ injury upon placing him on IR in September. His two IR stints in 2020 came because of hamstring injuries. The veteran interior D-lineman missed the final seven games of Arizona’s season. The Cardinals gave Phillips a three-year, $30MM deal in 2020, bringing him west after his 9.5-sack 2019 season with the Bills. The 29-year-old defender has yet to deliver much in the way of production since, adding some pressure ahead of his season debut.

Phillips is close to rejoining a team that has improved since he last suited up. The Cards are the league’s lone remaining unbeaten, at 5-0, and now have J.J. Watt anchoring their defensive line. A Phillips return in Week 6 would help a Cardinals team that is expected to be without Chandler Jones, who tested positive for COVID-19 this week. The Cards rank sixth in the league in scoring defense.

In addition to Phillips’ return to practice, the Cardinals placed both tight end Maxx Williams and special-teamer Zeke Turner on IR. Williams is facing the prospect of missing the rest of this season with a knee injury; Turner is battling a shoulder ailment. Arizona added some depth by signing veteran tight end Richard Rodgers to its practice squad.