For the third time this season, Colts star running back Jonathan Taylor will be held out of action for the weekend, according to Mike Chappell of Fox59. The absence of Taylor will pave the way for Deon Jackson to make his second start of the season. 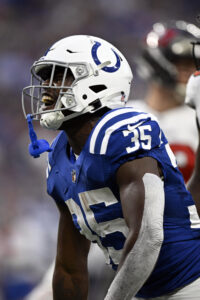 After an awe-inducing sophomore season in which he led the NFL in rushing yards and touchdowns, Taylor’s third year in the league has not gone according to plan. He started off hot with a 161-yard day in the team’s season-opening tie with the Texans but quickly cooled off as the offense dealt with growing pains and he dealt with an ankle injury.

Th ankle injury would force Taylor to miss two straight games in October. In his second game back from the injury absence, Taylor aggravated the right ankle during a loss to the Commanders. The injury that has already caused him to miss two games already could continue to hurt the Colts. Despite ruling Taylor out for this game, head coach Frank Reich has no plans to place him on injured reserve, according to Zak Keefer of The Athletic. The injury appears to be a week-to-week issue that the Colts want flexibility in dealing with for now.

With Taylor out, Jackson will get another chance to lead the Colts’ rushing attack. In two weeks without Taylor so far this year, Jackson has earned a combined 104 rushing yards and a touchdown, adding 14 catches for 108 yards through the air. The offense stands to look a bit different with Sam Ehlinger playing quarterback in place of Matt Ryan, but Jackson still figures to earn the lion’s share of the carries.

Although the Colts were able to acquire former Bills running back Zack Moss when trading away Nyheim Hines, Moss has only been with the team a couple of days and likely won’t have a very good grasp of the offense. Indianapolis is expected to elevate practice squad running back Phillip Lindsay for Sunday’s matchup in Foxborough, as they did the previous two games without Taylor. Lindsay contributed in his Colts debut with 11 carries for 40 yards but was relegated to a lesser role the following week, only carrying the ball three times for seven yards.

Giving Moss more time to practice and learn the offense may eventually dull the need for Lindsay, but for now, the Colts’ rushing offense will rely on the legs of Jackson and Lindsay as long as Taylor is out. As long as Taylor remains a week-to-week case, this will continue to be the gameplan.

The Colts activated Odeyingbo from their non-football injury list Saturday, introducing the prospect of its top two draft picks playing together on the defensive line early. A Vanderbilt product viewed as a player who can line up at both defensive end and D-tackle, Odeyingbo went down while training for the draft. Like Titans defensive lineman Jeffery Simmons in 2019, Odeyingbo is set to see rookie-year action after suffering a major injury during the winter.

Indianapolis selected defensive end Kwity Paye in the first round and followed that up by selecting Odeyingbo in Round 2. The team let Denico Autry defect to Tennessee in free agency and did not re-sign Justin Houston. The Paye-Odeyingbo pair represents the Colts’ hopeful replacements. Odeyingbo, who goes 6-foot-6 and 276 pounds, recorded 12 tackles for loss as a junior with the Commodores and added 5.5 sacks as a senior. Paye has yet to record a sack in four-plus games played this season but has recovered two fumbles.

Among the other roster moves the Colts made before this afternoon’s Week 8 deadline, the team cut running back Jordan Wilkins. A 2018 draftee, Wilkins has backed up Marlon Mack and then Jonathan Taylor for more than three seasons. But fellow 2018 pick Nyheim Hines‘ passing-down and special teams ability won out, moving Hines higher on the depth chart and leading to an extension. Wilkins still saw sporadic time in the backfield from 2018-20 and resides as an interesting waiver option.

Wilkins averaged 5.6 yards per carry as a rookie and 6.0 per tote in 2019, seeing increased time when Mack missed games with injuries. The former fifth-round pick was not as efficient last season (3.7 per carry on a career-high 84 handoffs) and has not received a carry this year. Still, with the Colts previously placing Mack on the trade block, this Wilkins cut is an interesting decision.

The Colts have assembled their post-draft group, agreeing to terms with five UDFAs. Here is Indianapolis’ initial undrafted haul:

The Colts gave Jackson a lofty (for a UDFA) signing bonus, with NFL reporter Aaron Wilson tweeting the ex-Duke back will collect $45K to sign. Only two running backs clocked faster 40-yard dash times at 2021 pro days than Jackson’s 4.4-second sprint, according to Colts.com. Despite not topping 175 carries in any of his college seasons, Jackson totaled 2,267 rushing yards during a three-season run as a starter.

Vaughns will join former Trojans teammate Michael Pittman Jr. with the Colts; the former enjoyed a four-year run as a key USC aerial contributor. Working with Sam Darnold and 2022 first-round prospect Kedon Slovis, Vaughns totaled 2,801 receiving yards and 20 touchdown catches in four seasons. The 6-foot-2 wideout also saw extensive action as a punt returner. He posted 800-plus-yard seasons as a freshman and junior and was on pace for another in the Pac-12’s COVID-19-abbreviated 2020 slate.

Kaufusi will follow brothers Corbin and Bronson into the NFL. A 2016 Ravens draftee, Bronson played for the Ravens and Jets from 2017-19. The Packers and 49ers, respectively, gave Bronson and Corbin reserve/futures contracts in January. Father Steve Kaufusi also played in the NFL, spending time with the Buddy Ryan-era Eagles.