Here are today’s minor moves from around the league, including the Cowboys’ and Titans’ standard gameday elevations for the season’s last Thursday Night game:

Badie is a rookie sixth-round pick that failed to make the Ravens initial 53-man roster. The 22-year-old had a breakout senior season at Mizzou that saw him rush for 1,604 yards and 14 touchdowns, adding 330 receiving yards and four receiving touchdowns, as well. After being waived in the team’s final roster cuts before the season, Badie signed to the Ravens practice squad, where he’s remained all season. Badie adds to the quantity of the Broncos’ room of running backs that currently holds Latavius Murray, Chase Edmonds, and Marlon Mack, as well as fullback Andrew Beck.

The three Titans’ signees are filling roster spots vacated by quarterback Ryan Tannehill and linebackers Bud Dupree and Zach Cunningham, all of whom were placed on injured reserve today.

The Titans are bracing for bad news surrounding their starting QB, but the team had some other injuries to deal with today. Aaron Wilson of ProFootballNetwork.com (via Twitter) reports that Tennessee has placed offensive lineman Dillon Radunz on injured reserve. 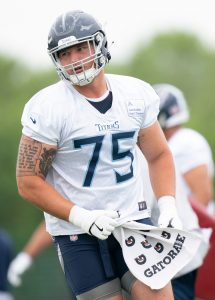 Radunz suffered a torn ACL on Sunday, according to Paul Kuharsky. The lineman’s placement on IR already meant he was going to miss the rest of the regular season, but the ACL tear means he’ll probably miss a portion of the 2023 campaign, as well.

The 2021 second-round pick started only one of his 12 appearances as a rookie, and he had a similarly limited role through the first chunk of the 2022 season. He started four games for the team between Weeks 5 and 12, and he played a portion of his team’s offensive snaps in Week 13 and Week 15. Pro Football Focus has given Radunz one of the top pass-blocking scores at his position and one of the lowest run-blocking scores.