On this date in 2018, we got a rare September trade. On September 25, 2018, the Bills sent offensive lineman Marshall Newhouse to the Panthers. In exchange, Buffalo received a conditional 2021 seventh-round pick. 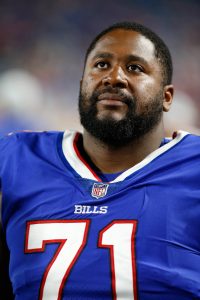 Newhouse started 31 of 47 games for the Packers through his first three seasons in the NFL, but by the time 2018 came around, Newhouse had struggled to hold a steady gig. Still, despite brief stints with the Bengals, Giants, and Raiders, the versatile lineman found a way to stick in the lineup. This included a 2017 campaign where he started each of his 14 games in Oakland.

So, while the Bills had some depth on the offensive line, Newhouse’s ability to play both tackle and guard made him a natural target once he was let go by the Raiders. During the 2018 offseason, Newhouse joined Buffalo on a one-year deal. It looked like Newhouse had carved out a role following the trade of Cordy Glenn and the departure of Seantrel Henderson. However, through the first few weeks of the season, the offensive lineman didn’t do much behind starters Dion Dawkins and Jordan Mills. So, on this date in 2018, the Bills decided to cut their losses and move on from the veteran, shipping him off to Carolina.

Carolina also seemed to value Newhouse’s versatility, except they had a depleted depth chart and needed the veteran to play. With Daryl Williams and Matt Kalil sidelined. the hope was that their acquisition would serve as a dependable backup and fill-in behind Taylor Moton and Amini Silatolu. Newhouse ended up seeing the field for 11 games (two starts) for his new team, and after seeing time on only 14 snaps in three games with Buffalo, he got into 197 snaps with the Panthers.

The Panthers didn’t qualify for the playoffs, and Newhouse decided to move on from the organization in 2019 as he pursued a ring. He signed with the Saints during the offseason, but he didn’t make it to the regular season. He ended up spending much of the 2019 campaign with the Patriots, getting into 15 games with nine starts. However, New England was ousted in the first round. Newhouse spent the 2020 campaign with the Titans, getting into only four games.

From Buffalo’s perspective, the trade was a mixed bag. The positive: the team quickly signed Jeremiah Sirles to take Newhouse’s spot on the roster, and he ended up getting into only 12 games (with five starts) for Buffalo. The negative: while the Bills ended up receiving that conditional seventh-round pick from the Panthers, they didn’t do much with it. They used the pick on Texas Tech offensive lineman Jack Anderson, but the rookie ended up getting waived by the team and landing on their practice squad. He was snagged by the Eagles earlier this week.

It’s hard to expect a whole lot from a September trade, and in hindsight, this trade really didn’t provide much intrigue for either side. Still, you’ve got to give credit to both squads for slightly shaking up their squads so early in the season.