The Patriots fielded trade calls on Isaiah Wynn this offseason but opted to hang onto the fifth-year tackle. The team has since benched the former first-round pick, pointing to a 2023 exit. New England is entertaining the prospect of Wynn departing sooner.

Interest in Wynn has surfaced again ahead of the Nov. 1 trade deadline, according to NFL.com’s Mike Giardi, who notes (via Twitter) the Pats have received calls on both Wynn and Kendrick Bourne. Both players have seen their Pats stock plummet in 2022, leading to uncertainty about their places on the team going forward. 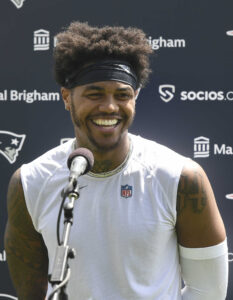 After playing 16 games last season, the once-injury-prone Wynn has stayed healthy this year as well. But the Pats have both changed Wynn’s position, moving him from left tackle to the right side, and benched him. Wynn was a healthy scratch against the Bears on Monday. Marcus Cannon, whom the Pats initially brought back as a practice squad stash this year, started in Wynn’s place against Chicago. With swing option Yodny Cajuste being designated for return this week, Wynn’s path back to regular duty becomes more complicated.

In six games this season, Wynn has committed an NFL-high eight penalties and been charged with three sacks allowed. Pro Football Focus has still viewed Wynn (39 career starts) as a plus run-blocking presence, but his trade value has dropped since this season began. Wynn’s fifth-year option salary ($10.4MM) also stands to interfere with a potential trade. If Wynn is not moved over the next week, he will almost certainly depart in free agency come March.

A formerly well-regarded 49ers auxiliary receiver, Bourne caught 55 passes for 800 yards and five touchdowns last season. Despite being signed to a lower-cost deal, Bourne outperformed fellow UFA addition Nelson Agholor. Issues during training camp and the Pats’ receiver additions have affected Bourne’s status, and he did not play against the Bears. The ex-49er has just 11 catches for 156 yards this season. He has taken a backseat to trade acquisition DeVante Parker and second-round pick Tyquan Thornton in New England’s now-Matt Patricia-run offense.

Believed to be available for “the right price,” Bourne is signed through 2024 via the three-year, $15MM deal he signed last March. Trading the 27-year-old pass catcher would save the Patriots $5MM, and Bourne — attached to a $3.5MM 2022 base salary — may well welcome a scenery change given the way his year has gone.

Kendrick Bourne has seen a reduced role in New England this season, and it sounds like the Patriots wideout may be on the trade block. According to Armando Salguero of OutKick.com, Bourne is “available for the right price.”

Following the offseason acquisition DeVante Parker (and, to a lesser extent, the second-round selection of Tyquan Thornton), the Patriots were eyeing a crowded receivers room heading into the 2022 campaign, and the team’s depth at the position meant someone was going to lose out on snaps. Through the first six weeks of the season, that’s been Bourne. The 27-year-old is firmly behind Parker and Jakobi Meyers when it comes to snaps, and he’s now competing with Thornton and veteran Nelson Agholor for any leftover reps.

The receiver only saw a pair of offensive snaps in Week 1. He’s seen an increased role in recent weeks, including a Week 5 outing where he got into 57 percent of his team’s offensive snaps (thanks in part to the absence of Meyers). However, that was followed up by a Week 6 contest where he was limited to only six percent of New England’s offensive snaps. Through six games (one start), Bourne has hauled in 11 receptions for 156 yards.

This is a significant drop from last season, where Bourne emerged as one of Mac Jones‘ favorite targets. After joining the Patriots in the offseason, the wideout proceeded to have a career season, finishing with 55 receptions for 800 yards and five touchdowns. While the team’s crowded WR room has certainly played a role in Bourne’s reduced role, Salguero writes that the wideout’s inconsistency at practice has “gotten him into some trouble” with coaches, particularly offensive play-caller Matt Patricia. It’s usually tough to get out of Bill Belichick’s doghouse, so a trade may ultimately be best for both sides.

Kendrick Bourne was one of the Patriots’ most productive wide receivers in 2021, but he was limited to only a pair of offensive snaps during the team’s Week 1 loss. While coach Bill Belichick said Bourne’s lack of playing time wasn’t a disciplinary measure, Doug Kyed of ProFootballFocus.com writes that the wideout may still be paying for a few preseason incidents.

Bourne was ejected for fighting during a joint practice with the Panthers, and he was late to a meeting later that same week. Bourne didn’t see the field during that week’s preseason contest, but you’d assume he’d be out of the doghouse almost one month later.

As Kyed writes, part of Bourne’s role could simply be attributed to his spot on the depth chart. DeVante Parker, Jakobi Meyers, and Nelson Agholor soaked up the majority of the snaps at wide receiver, and the team also relied on two tight-end sets with Hunter Henry and Jonnu Smith on the field. Someone was going to have to be the odd man out on offense, and for the first game, it was Bourne.

However, he should get a longer look this weekend. Jeff Howe of The Athletic tweets that the receiver’s playing time is expected to increase this weekend against the Steelers.

Bourne had a career year during his first season in New England, finishing with career highs in receptions (55), receiving yards (800), and touchdowns (five). Despite only playing two offensive snaps last weekend, the 27-year-old still pulled off the offense’s biggest play of the game when he hauled in a 41-yard reception.

5:58pm: The Pats have a deal with Bourne. They are signing the former 49ers receiver to a three-year, $22.5MM pact, Ian Rapoport of NFL.com tweets. While Bourne and Nelson Agholor are not on the top tier of available wideouts, they are off the market as part of New England’s receiver-retooling effort.

4:16pm: Usually fairly restrained early in free agency periods, the Patriots have been active on Day 1 of the legal tampering period. They are now moving toward a deal with 49ers wide receiver Kendrick Bourne, Jeremy Fowler of ESPN.com tweets.

Multiple teams have made offers to Bourne, per Fowler, but he and the Pats are discussing terms at this juncture. Bourne would represent a notable add to a receiver room in dire need of 2021 contributors.

New England has given either Cam Newton (or a to-be-determined QB1) Jonnu Smith and added Matt Judon and Jalen Mills to its defense. Bourne would be the team’s first wideout addition this offseason. The Pats have been in transition at this spot for multiple seasons, so Bourne would be a welcome signing.

Despite missing time because of COVID-19 last season and the 49ers having lost Jimmy Garoppolo for much of the slate, Bourne emerged with his most productive year. He caught 49 passes for 667 yards and two touchdowns. During San Francisco’s 2019 NFC championship season, Bourne played a key role but took a backseat to the likes of George Kittle, Emmanuel Sanders and Deebo Samuel in the 49ers’ aerial hierarchy.

The NFL has not needed to adjust its schedule since Week 7, though Division I-FBS certainly has. But more teams are dealing with COVID-19 issues over the past several days. Here is the latest on this NFL season’s defining subject: