Trysten Hill did not make it to free agency. The former Cowboys second-round pick will head to Arizona, with NFL.com’s Tom Pelissero indicating (via Twitter) the Cardinals claimed his contract. 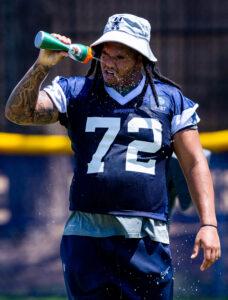 The Cards will take a flier on the fourth-year defensive tackle, whose rookie contract expires at season’s end. After acquiring Johnathan Hankins, the Cowboys did not view Hill as a keeper any longer. The Cowboys dangled Hill in trades for a stretch, but after no takers emerged, he hit the waiver wire.

Although he was a healthy scratch in Dallas’ Week 8 romp over Chicago, Hill worked as a part-time contributor on a deep defensive line this season. Hill, 24, was active for the Cowboys’ first seven games and logged a 29% snap rate during those contests. He has not started a game since being a Cowboys first-stringer five times in 2020. Those represent the Central Florida product’s only NFL starts. The Cowboys drafted Hill two defensive coordinators ago (Rod Marinelli); its current D-tackle cogs came in during Mike Nolan or Dan Quinn‘s DC tenures.

Arizona has a future Hall of Famer (J.J. Watt) and an ascending contract-year talent (Zach Allen) leading its defensive front. Only three other D-linemen — Leki Fotu, Jonathan Ledbetter and Michael Dogbe — reside on Arizona’s active roster, making some room for Hill to carve out a role. Hill did not do enough to stand out with the Cowboys; his Cardinals stay will help establish his free agency stock.

The Cowboys attempted to find a taker for defensive tackle Trysten Hill. After no trade transpired, Dallas is moving on. The Cowboys cut Hill shortly after the deadline, Jon Machota of The Athletic tweets.

While this will end Hill’s underwhelming tenure with the Cowboys, they had been using the former second-round pick as a rotational player this season. From that end, it marks an interesting decision to move on.

A roster crunch created a decision for the Cowboys. The team designated defensive end Tarell Basham for return Oct. 20. The veteran edge player must be activated by next week or he misses the rest of the season. The Cowboys currently roster 11 defensive linemen, without Basham in the equation, and decided they no longer had room for Hill.

Johnathan Hankins came over from the Raiders via trade, bumping Hill from a rotation that includes Dan Quinn-era investments Osa Odighizuwa and Quinton Bohanna, along with 2020 draftee Neville Gallimore. Hill resided as the Cowboys’ longest-tenured defensive tackle, but he the team selected him during Rod Marinelli‘s run as defensive coordinator.

Dallas made Hill a healthy scratch for its Week 8 game against the Bears, marking a change from the Central Florida product’s previous role. Hill, 24, had played between 29-38% of Dallas’ defensive snaps in all but one of the team’s first seven games. But the franchise decided years ago Hill was not a starter. His five starts all came during the 2020 season.

Brandin Cooks is available, and Dan Graziano of ESPN.com notes (via Twitter) the Texans are in discussions involving the ninth-year receiver. But Cooks’ $18MM guaranteed 2023 salary — which came to pass after Houston re-signed him on a two-year, $39MM pact in April — has proven to be an impediment here. Teams are not moving on Cooks unless the Texans pick up a chunk of that salary. Cooks, 29, was linked to giving up some guaranteed money to facilitate a trade back to the Rams. But it is unlikely he will give up too much cash to be moved. The Giants and Vikings have also been connected to the thrice-traded Cooks. For what it’s worth, Cooks was not at Texans practice Tuesday. Personal reasons — not an imminent trade — are believed to be behind Cooks’ absence, NFL.com’s Garafolo tweets.

With the deadline in less than three hours, here is the latest from the trade front:

Cowboys defensive tackle Trysten Hill has seen his fair share of obstacles en route to a career in the NFL, some self-inflicted. It appears he hasn’t seen the end of these obstacles yet, as ESPN’s Todd Archer reported that Hill’s road to continue playing in the NFL may require him to boost his stock and earn some trade-value at camp this summer. 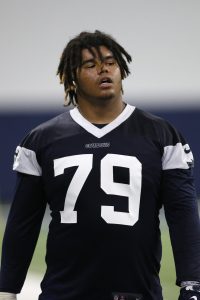 The Cowboys selected Hill in the second round of the 2019 NFL Draft as their top draft pick that year. Hill had entered the draft early, forgoing his senior season after three years at UCF. He had started all 13 games in both his freshman and sophomore seasons with the Knights, but, by his junior year, Hill had reportedly fallen out of favor with the UCF coaches and only started one game during his third season. Despite not being granted the privilege of starting, 2018 was Hill’s best year in Orlando as he doubled his career sack total from 3.0 to 6.0 and more than doubled his career tally of tackles for loss from 9.5 to 20.0.

The Cowboys’ top-drafted rookie didn’t see much of the field in his first season. Playing behind Maliek Collins and Christian Covington, Hill only saw seven games of action in 2019, never playing in even half of the team’s defensive snaps. In those seven appearances, Hill was only able to make 5 total tackles, one for a loss, and 2 quarterback hits.

In his second year with the team, a preseason injury to presumed starter Gerald McCoy left the door wide open for Hill. Hill was named the starting three-technique defensive tackle to start the season. Unfortunately for Hill, he tore his ACL in a Week 5 game against the Giants and spent the rest of the season on injured reserve.

His time before the injury wasn’t all sunshine and roses, though. While he was starting to make more of an impact on defense, racking up 11 total tackles, one for a loss, and 3 quarterback hits, a couple of plays with questionable intention brought back memories of the behavior that lost Hill his starting honors in college. In a Week 3 game against Seattle, Hill caused controversy on plays against running back Chris Carson and quarterback Russell Wilson. After tackling Carson, Hill appeared to twist Carson’s knee after the whistle had blown. Carson suffered a knee sprain and Hill was fined $6,522 for the act. On the same drive, Wilson was the recipient of a late, helmet-to-helmet hit from Hill. While Wilson suffered no injury as a result, the league still fined Hill an additional $6,522 for the hit.

Last year saw Hill start the season on the reserve/PUP list. He wasn’t activated until Week 10 and failed to make the same impact he had the prior year, though he did record his first portion of a sack in the NFL. Hill fought for playing time behind Osa Odighizuwa, Carlos Watkins, and Quinton Bohanna. When he wasn’t fighting for playing time, though, he was still fighting. After a Week 12 game against the Raiders, Hill punched Las Vegas guard John Simpson, leading to a one-game suspension.

Now, Hill is headed into a contract year. Odighizuwa, Watkins, and Bohanna all return this year after taking playing time from him last season. Even Neville Gallimore has apparently risen above Hill on the depth chart, leading to some long odds for Hill to earn significant playing time.

As Archer suggested above, the best path forward for Hill might be to seek a less-crowded depth chart. If Hill can take advantage of the playing time he will get as a back up in the preseason and prove that he can behave and play nicely with the other players in the NFL, the Cowboys may be able to move Hill for a reasonable return and provide him with an opportunity to start again in a new city.

Tuesday, 10:40pm: Hill’s suspension has been reduced from two games to one by NFL-NFLPA appeals officer Derrick Brooks, per NFL Network’s Tom Pelissero (via Twitter).

Monday, 3:13pm: The NFL has suspended Cowboys defensive tackle Trysten Hill for the next two games without pay (Twitter link via NFL.com’s Ian Rapoport and Tom Pelissero). Hill, who punched Raiders lineman John Simpson after last week’s game, won’t be eligible to return to the roster until Monday Dec. 13.

“After the Las Vegas Raiders-Dallas Cowboys game on November 25, you engaged in conduct that this office considers unnecessary roughness and displays a lack of sportsmanship,” VP of Football Operations Jon Runyan wrote in an open letter to Hill. “Specifically, as both teams were shaking hands, you waited more than 50 seconds for your opponent at the 50-yard line. When you located him, you then walked toward him in the opposite direction of your locker room. You both engaged in a verbal chest-to-chest confrontation which you escalated by throwing an open hand punch to his facemask, forcible enough to cause your opponent’s helmet to come off.”

Hill could still appeal the ban and make his case before either Derrick Brooks or James Thrash, the ex-players who operate as suspension hearing officers. But, barring any changes, Hill will be withheld from the next two games against the Saints and the Washington Football Team.

It’s yet another blow to the Cowboys’ defensive line, though they could have reinforcements in time for Thursday. DeMarcus Lawrence, Randy Gregory, and Neville Gallimore have all been designated for return and would be eligible to play against New Orleans.