Although Joe Haden announced his retirement Wednesday morning, a few well-known cornerbacks remain in free agency. All-Decade-teamer Chris Harris joins the likes of Xavier Rhodes and Jackrabbit Jenkins as available vets. But each is 32 or older. Kevin King, who would be going into his age-27 season, looks to be unattached for a different reason.

King does not intend to play this season, according to Doug Kyed of Pro Football Focus, who adds health is driving King to make this unusual call. King, 27, dealt with a litany of injuries and a COVID-19 contraction last year and is eyeing a 2023 NFL return. The University of Washington product turned down multiple offers this offseason, Kyed adds.

Although King struggled in the 2020 NFC championship game, the Packers re-signed the former second-round pick on a one-year deal worth $5MM in 2021. King played 11 games last season, counting Green Bay’s playoff tilt, and started six. The veteran outside cover man was among the many Packer starters to miss a chunk of the season. Hip, knee and shoulder injuries, along with a concussion and COVID, led to King missing seven games. Healing up is obviously critical, and it is not known how much time is needed to do so.

This strategy does run the risk of King’s value cratering, with teams less likely to invest much in a player who dealt with enough injuries they cost him the following year of work. Returning to the league after a full season away is uncommon but far from unprecedented. It might take a successful workout for the five-year Packer to convince a team to add him next year. King missed extensive time during his first two NFL seasons as well, with shoulder and hamstring issues shutting him down in 2017 and ’18.

One of four first- or second-round corners the Packers have drafted since 2017, King has started 42 career games. He rebounded from his early-career injuries to intercept five passes in 2019 and worked as Jaire Alexander‘s primary sidekick during the now-well-paid corner’s time in Wisconsin. Eric Stokes, a 2021 first-rounder, now fills that role.

Injuries aside, PFF graded King’s 2021 season as his best. The veteran cover man did see his yards-per-target, passer rating allowed and completion percentage yielded figures rise from 2020, however. It will be interesting to see if King’s plan to heal up this year pays off down the line.

The Packers are bringing back Kevin King (Twitter link via NFL.com’s Tom Pelissero). The cornerback will return on a one-year deal worth $6MM.

The Packers nabbed King in the second-round of the 2017 draft due to concerns about his health. If not for injuries, King would have been a top-32 choice, so the Packers saw the Washington product as a strong value. Though he’s flashed serious ability at times, Packers fans haven’t been wild about his coverage on the whole. King has shown a knack for clutch interceptions in the past, but the memory of his NFC Championship Game performance is still fresh.

King, who hauled in five interceptions in 2019, will return in 2021 to pair with lead corner Jaire Alexander.

Tramon Williams may soon be set for a historic NFL feat: suiting up for playoff games with two different teams in the same season. The Packers elevated the cornerback from their practice squad Saturday.

The Ravens, however, waived Williams soon after their Round 2 loss. Since no one claimed him, the 37-year-old defender would be eligible to play in Sunday’s Packers-Buccaneers game. Since Tuesday, Williams has been waived, made a Packers visit, signed with the Packers and now will rise from the practice squad to the active roster via the COVID-19 replacement route.

If Williams plays Sunday, it will be his fifth NFC championship game as a Packer. Among current Packers, only he and kicker Mason Crosby saw action in the frigid 2007 NFC title game against the Giants. Williams playing Sunday would make him the first player ever to do suit up for two different teams in the same playoffs, according to ESPN.com’s Adam Schefter (on Twitter).

Williams’ status may be tied to Kevin King‘s availability. King is battling a back injury that flared up Friday, though Jeremy Fowler of ESPN.com notes the young corner is feeling better after that issue (Twitter link). King fully participated in Green Bay’s Wednesday and Thursday practices but did not work out Friday.

The NFL loosening restrictions on players changing teams amid the pandemic would allow Williams to complete this postseason double dip. The league previously required players who changed teams to go through six days’ worth of coronavirus tests before practicing with their new teams. That timetable would not have allowed Williams to play in the NFC championship game. But the league since made a change to allow players who were already being regularly tested to change teams and suit up without navigating the near-weeklong waiting period.

A Packers UDFA in 2007, Williams began his career with eight Green Bay seasons. After leaving for Cleveland in free agency in 2015, he made his way back to Wisconsin in 2018. Williams spending the 2018 and ’19 seasons with the Packers certainly played a key role in his return. Overall, he has spent four seasons playing in current Packer DC and ex-Browns HC Mike Pettine‘s system since 2015.

The Packers have placed cornerback Kevin King on IR, a source tells Field Yates of ESPN.com (on Twitter). Running back Tra Carson has also been ruled out for the remainder of the year.

King, a second-year pro, has missed the last four games with a hamstring injury. Ultimately, the injury was too serious to overcome and, frankly, it wasn’t worth risking a more serious issue at this stage of the season. The Packers are 4-7-1 and, naturally, are more concerned with the former second-round pick’s long-term health.

Both of King’s pro seasons have ended prematurely. Last year, King appeared in nine games and made five starts before he was shut down in December.

King was the Packers’ first pick in the 2017 draft after Green Bay moved down from No. 29 in a swap for the No. 33 selection (King) and a fourth-round choice. There were other big names available, but the Packers were happy to expand their draft stockpile and land the Washington product after he posted a 4.43 second 40-yard-dash, a 39.5-inch vertical leap, and the best times of any cornerback in both the three-cone drill and the 20-yard shuttle.

The Packers placed cornerback Kevin King on Injured Reserve with a shoulder injury. To take his place, they have activated defensive back Demetri Goodson from the PUP list.

King, a second-round pick, was the Packers’ first pick in the 2017 draft after Green Bay moved down from No. 29 in a swap for the No. 33 selection (King) and a fourth-round choice. There were other big names on the board late in the first round, but the Packers were happy to expand their draft stockpile and land the Washington product. King only had so-so hype heading into the draft process, but he quickly turned heads with a 4.43 second 40-yard-dash, a 39.5-inch vertical leap, and the best times of any cornerback in both the three-cone drill and the 20-yard shuttle.

As a rookie, King appeared in nine games and made five starts for the Packers. Unfortunately, he was sidelined last week and team doctors have determined that he needs additional time to recover.

The advanced metrics haven’t been wowed with King’s play (he ranks 109 out of 115 qualified CBs, per Pro Football Focus) but his presence will be missed in Green Bay. Without King, the Packers will have to rely on two 2017 undrafted free agents, one 2016 UDFA, and a former sixth-round pick (Goodson) to support starters Davon House and Damarious Randall.

MRI results show that wide receiver Randall Cobb (shoulder) and defensive lineman Mike Daniels (hamstring) did not suffer major injuries in the Packers‘ loss to the Falcons on Sunday night, according to Ian Rapoport of NFL.com (Twitter links). Both are considered day-to-day, and should be available for Green Bay’s Week 3 game against the Bengals. There’s no official word to the severity of wideout Jordy Nelson‘s quad issue, but the Packers don’t believe the injury is serious, per Rob Demovsky of ESPN.com.

The Packers have signed rookie cornerback Kevin King (Twitter link via Field Yates of ESPN.com). Green Bay traded down from the No. 29 selection and acquired picks at No. 33 and No. 108. King, taken with the first pick in the second round, is their top draft pick in the 2017 class. 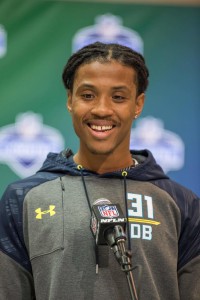 As a senior, King totaled 44 tackles (including 3.5 tackles for a loss) and two interceptions. At 6’3″, King offers great height for the cornerback position and he boosted his stock in his final year on campus by having his first ever slate of perfect attendance. Some evaluators worry that he doesn’t have enough speed to be a standout CB, but Green Bay’s front office clearly disagrees.

With ten draft picks in this year’s class, the Packers have even more work to do in the coming days.