Efe Obada has found his latest home in the NFL. The Commanders announced on Wednesday that they are signing the veteran defensive end. 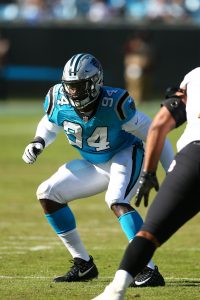 Obada, who will be 30 by the start of the 2022 season, has played four seasons in the league. The first three of those came with the Panthers, where he suited up for 42 games. The 2019 season saw him make a career-high 24 tackles, but it’s the only year in which he didn’t register a sack.

Obada’s ability to get to the quarterback was on display the following season, as he posted 5.5 sacks, to go along with a pair of forced fumbles. After signing back-to-back one-year deals to stay in Carolina, the former UDFA joined the Bills last offseason. He started one of ten games in Buffalo, registering 3.5 sacks.

Obada – who was born in Nigeria and raised in London – is best known for a unique distinction he holds. After starting his football career with the London Warriors of the British American Football Association, he entered the NFL via the International Player Pathway Program. When he successfully made the Panthers’ 53-man roster in 2018, he became the first player to do so who took that route.

Now, Obada will join a Commanders’ defensive front headed by edge rushers Chase Young and Montez Sweat. Given his success as a rotational option, he should play a role in helping the unit improve on its disappointing performance in 2021.

Panthers head coach Matt Rhule has had some difficulties making the same immediate impact in Carolina that gained him notoriety in Waco. In two years at the helm, Rhule hasn’t succeeded in improving his team’s win total from the season before he was hired. In an attempt to make some needed improvements, the Panthers announced that they were letting go of offensive line coach Pat Meyer, defensive line coach Frank Okam, and special teams coordinator Chase Blackburn.

The team struggled on both sides of the line this year and it looks like any attempts to improve will be made by new position coaches, while the special teams unit saw four different kickers and three punters throughout the year, including the preseason.

Meyer has been with Rhule since the move to Carolina. He’s been coaching in the NFL for 8 years with stops at the Chargers, Bills, and Bears. Meyer entered the NFL with Marc Trestman, moving with the coach from the CFL to Chicago.

Okam joined Rhule at Baylor and followed the notably loyal coach to the Panthers. Rhule had brought much of his staff from Temple with him to Baylor, so it was safe to assume some of the Baylor staff would end up in Carolina, as well. Despite coaching up young draft picks like Derrick Brown, Yetur Gross-Matos, and Bravvion Roy and seeing career numbers from Brian Burns, Efe Obada, and Marquis Haynes, it seems Rhule is wanting a bit more from this position group.

Chase Blackburn was a longtime linebacker for the Giants before spending his final two years playing in Carolina. After about a year of retirement from playing, Blackburn became a special teams intern in Ron Rivera‘s staff. When Rhule came in to replace Rivera, Blackburn was one of two holdovers from the staff along with Jake Peetz, who is now the offensive coordinator at LSU.

It’s yet to be seen who will replace them, but Rhule continues to show hints of what made him successful at the college level by attempting to make the necessary changes to succeed. With young talent on both sides of the ball, Rhule may yet turn this team around.

The Panthers have signed defensive end Efe Obada to a new one-year deal, per a club announcement. Obada was set to be an exclusive rights free agent, so he wouldn’t have been able to sign with another club anyway.

The Panthers are still searching for their next head coach, so it’s unlikely that the new pact includes significant guarantees. After all, their next HC might not be as high on Obada as current GM Marty Hurney.

Obada was born in Nigeria and did not play football at the collegiate level. In 2014, he hooked on with the London Warriors of the British American Football Association and wound up joining the Cowboys’ practice squad in 2015 as a part of the international pathway program. Finally, in 2018, he became the first international pathway program player to crack a 53-man roster when he was activated by the Panthers.

In 2019, Obada registered 24 total tackles and one pass defensed while appearing in all 16 games.