Raekwon Davis‘ knee injury will keep him off the field until at least October. The Dolphins placed the defensive tackle on injured reserve today, reports NFL Network’s Cameron Wolfe (via Twitter). 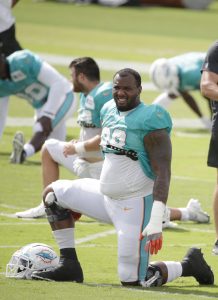 Fortunately, the injury won’t knock Davis out for the season. The defensive lineman will be required to sit on IR for three weeks before he’s eligible to return.

The Alabama product was a second-round pick by the Dolphins in 2020, and the defensive lineman earned PFWA All-Rookie Team honors following a standout rookie campaign. Davis ultimately saw time in 16 games last season (12 starts), collecting 40 tackles, one tackle for loss, and one QB hit. He started Sunday’s win over the Patriots, but he only saw time in five snaps before suffering his injury.

With Davis sidelined, the Dolphins could turn to John Jenkins to pick up the slack. The 32-year-old signed with the Dolphins this past offseason.

Shortly after agreeing to terms with Tua Tagovailoa, the Dolphins hammered out a deal with one of his former Alabama teammates. 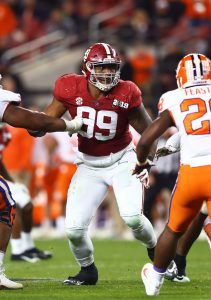 Miami signed second-round pick Raekwon Davis on Monday, Aaron Wilson of the Houston Chronicle tweets. The Dolphins drafted the defensive tackle with the No. 56 overall pick.

The Dolphins have now signed five of their 12 draft picks. Davis is the first of Miami’s two second-rounders to sign, with offensive lineman Robert Hunt still unsigned. Traditionally, second-round picks are not difficult to ink. Third-rounders’ deals are more complicated, but the slot system implemented by the 2011 CBA and retained by 2020’s agreement makes signing most draft picks a much simpler process.

Davis should be a candidate to start for the Dolphins soon, which would give the Dolphins a two-Raekwon front seven (joining linebacker Raekwon McMillan). Davis broke out as a sophomore with 8.5 sacks but only collected two over his final two seasons. Still, Davis saw extensive action for three Crimson Tide teams. Considering the depth Alabama annually possesses, that is an accomplishment several of the program’s recent draftees cannot claim.

Are you ready for surprises on draft day? It sounds like you should be. “The media is wronger about mock drafts this year than you guys have ever been,” one NFL general manager told Ian Rapoport of NFL.com (Twitter link). That’s undoubtedly because of the ongoing certainly involving COVID-19, which has caused the league to upend its predraft process. As Daniel Jeremiah of NFL.com tweets, “group think” is less likely to occur in 2019 because scouts and executives were unable to congregate at pro days, events where evaluators typically will — intentionally or not — develop something of a consensus on prospects.

After deciding whether “wronger” is actually a word, let’s take a look at more on the upcoming draft: