Already rostering one of the NFL’s more interesting receiver stables, the Giants added some depth to that group Tuesday. They signed wideouts Isaiah Ford and Keelan Doss, according to NorthJersey.com’s Art Stapleton (on Twitter). 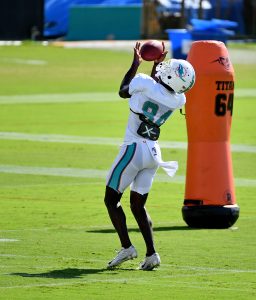 Both have been mostly backups or practice squad performers since coming into the league, though Ford has seen some run as a Dolphins auxiliary target. A former Dolphins seventh-round pick, Ford was traded to the Patriots just before the 2020 deadline. But the Pats never deployed him in a game and waived him not long after the deal, leading Ford back to the Dolphins via free agency barely a month later. He closed his second Miami stint last season.

A Virginia Tech product, Ford has 63 receptions for 681 yards and two touchdowns (both of which coming last season) over the past three years. Doss, a former UDFA out of California-Davis, enjoyed some Hard Knocks fame during the Raiders’ 2019 training camp but did not make an impact with his then-hometown team. Doss caught 11 passes for 133 yards as a rookie. He spent last season on the Falcons and Jets’ practice squads.

The Giants agreed to a reworked contract with Sterling Shepard, keeping the veteran slot receiver ahead of his seventh season. Kenny Golladay, Darius Slayton and Kadarius Toney are also back. The latter two have each been mentioned in trade rumors, though Slayton — a three-year contributor going into a contract year — profiles as the more logical trade candidate. New York’s new regime selected slot player Wan’Dale Robinson in Round 2 this year, crowding the team’s receiver room for the time being.