Although the Dolphins have not signed a single player to a standard 2021 contract this month, the club has still lost about $8MM in cap space, as Barry Jackson and Adam Beasley of the Miami Herald report. That’s because a few players hit incentives in their contracts that increased their 2021 cap charges. 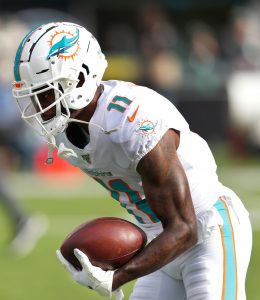 That’s not an insignificant amount of wiggle room, but the Dolphins do have a number of high-value draft picks, including the Nos. 3 and 18 overall selections and two second-round choices. If they keep all of those picks, Miami would need to allocate about $11.9MM for its draft class, per Jackson and Beasley. That doesn’t leave a ton of space for the team to conduct the rest of its offseason business.

After all, the ‘Fins will need to sign a wide receiver, a backup QB, and several linebackers, and they will also need to re-sign C Ted Karras or acquire a new center (though Jackson and Beasley say the club is high on Wisconsin-Whitewater OL Quinn Meinerz, Miami is not going to deploy a D-III rookie as its starting pivot).

The Dolphins do have plenty of options to create additional room, including cutting safety Bobby McCain or restructuring the contract of linebacker Kyle Van Noy. And the situation would be completely altered if the club were to trade for Texans QB Deshaun Watson, which appears to be a legitimate possibility.

The Dolphins’ extension talks with Eric Rowe look to have transpired quickly. The parties agreed on a three-year, $18MM deal, Adam Schefter of ESPN.com tweets. 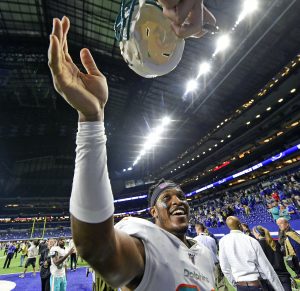 Miami’s latest in-season re-up will commit $7MM in guaranteed money to the veteran defensive back. Rowe initially signed with the Dolphins this offseason, and the ex-Patriot will stick around into the 2020s.

An 11-game starter at cornerback and safety this season, Rowe joins Allen Hurns as first-year Dolphins given extensions since the season’s outset. A former second-round Eagles pick, Rowe played for Dolphins HC Brian Flores with the Patriots and followed him to Miami on a one-year, $3.75MM deal. He will bypass a 2020 free agency stay to be part of the Dolphins’ unique rebuild.

Rowe’s 720 snaps already through three quarters of the regular season already represent a single-season high. The Dolphins removed every other recognizable talent from their secondary, trading Minkah Fitzpatrick and placing Xavien Howard, Reshad Jones and Bobby McCain on IR.

Though Pro Football Focus has not graded Rowe well as a safety, the 27-year-old defender has made a career-high 59 tackles. Having moved to safety midseason, Rowe looks like a future starter for the Dolphins at this spot. With Jones not expected back, Rowe and McCain may form the Fins’ 2020 back-line tandem.

Perhaps the only recognizable name in the Dolphins’ current secondary to most, Eric Rowe is finishing out a one-year contract. But the Dolphins would like him to return.

The former New England cornerback is discussing an extension to stay in Miami, Barry Jackson of the Miami Herald notes. Rowe signed a one-year, $3.5MM deal to join former Patriots assistant Brian Flores‘ first Dolphins team. And he’s been a key part of the secondary, one that has seen most of its notable talent either traded or land on IR.

Rowe has played both corner and safety this season, moving to the back line midway through the year. Pro Football Focus categorizes Rowe as a safety but has graded him as one of the league’s worst this season. After part-time roles in Philadelphia and New England, Rowe has played 95% of Miami’s snaps this season. The Dolphins traded Minkah Fitzpatrick to the Steelers and placed both Reshad Jones and Bobby McCain on IR last week.

The Eagles traded Rowe to the Patriots after his first season. The 2015 second-round pick started two playoff games for the Pats, including Super Bowl LII against his former team, and was a seven-game starter during their 2016 championship season.

The Pats let Rowe walk in free agency this year, but the Dolphins look to view him as part of their rebuild. Despite the Dolphins’ 2019 veteran purge, they have extended Jakeem Grant, Allen Hurns and Jesse Davis over the past three-plus months. The team is projected to hold north of $100MM in 2020 cap space.

The Dolphins have agreed to sign cornerback Eric Rowe, as Ian Rapoport of NFL.com tweets. It’ll be a one-year deal with a maximum value of $4.5MM, Ben Volin of The Boston Globe (on Twitter) adds, but his $500K signing bonus represents his only guarantee. In essence, Rowe will have to secure his roster spot in order to realize any significant cash from the deal.

Rowe, a former second-round pick of the Eagles, battled a groin injury throughout the season. Finally, in late October, the Pats were forced to place him on IR. Heading into March, the Patriots were expected to let him walk, and they’ll now see him twice in 2019, provided that he’s healthy and on the field.

Over the last three years with New England, Rowe has missed 27 possible regular season games. However, he offers promise and he could be in line for a larger role now that he is reunited with former Patriots defensive guru and new Dolphins head coach Brian Flores. Ultimately, however, there is a ceiling. Rowe figures to battle for a supporting role at cornerback behind Xavien Howard, Bobby McCain, and Minkah Fitzpatrick.

The Patriots are down a cornerback. ESPN’s Field Yates reports (via Twitter) that New England has placed Eric Rowe on the injured reserve. The 26-year-old has been battling a groin injury throughout the season. 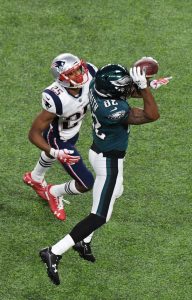 It’s a tough break for the impending free agent. The 2015 second-round was seemingly coming into his own this season, as he had compiled 10 tackles and one pass defended in four games (two starts). While he didn’t play enough snaps to earn a spot on Pro Football Focus‘ cornerback rankings, his score would have placed him right in the middle of the list.

The move leaves the Patriots relatively thin at cornerback for the time being. Starters Jason McCourty and Stephon Gilmore are both healthy, but the team is rostering three inexperienced cornerbacks behind the duo: Jonathan Jones, J.C. Jackson, and Keion Crossen.

Fortunately for the Patriots, they’ll soon be receiving some reinforcement. As ESPN’s Mike Reiss points out (via Twitter), rookie Duke Dawson is eligible to come off the injured reserve next week. Assuming the 2018 second-rounder is healthy, he could soon find himself as the team’s top reserve cornerback.

Back in January, an explosive piece from ESPN.com detailed a major rift within the Patriots organization. Since that time, there have been continued whispers about the tension in Foxborough, particularly between head coach Bill Belichick and franchise quarterback Tom Brady. Owner Robert Kraft has continually denied those rumors, and he did that once again on Friday. Appearing on CNBC, Kraft attributed the reports to “envy and jealousy.”

“We’ve been together 19 years, which is unheard of for a head coach, a quarterback and an ownership group,” Kraft said (via Michael David Smith of ProFootballTalk.com). “Thankfully, we have had a lot of success and whenever that happens you become a target. We understand that and there is always tensions and issues and different things you’ve got to deal with. That is part of the privilege of owning a team and being successful. I have a little saying that envy and jealously are incurable diseases. You’d rather be a recipient than a donor. That is what is going on now.”

A new book by ESPN’s Ian O’Connor has renewed interest in the dynamic between Belichick and Brady. In “Belichick: The Making of the Greatest Football Coach of All Time,”O’Connor reports that Brady would “divorce” Belichick if he could, but feared alienating New England fans after the Patriots traded backup (and possible successor) Jimmy Garoppolo to the 49ers last season.

Former Redskins GM Scot McCloughan filed a grievance against Washington for the balance of his contract, as Mike Florio of Pro Football Talk writes, and in-house litigation is moving forward. The Redskins refused to pay McCloughan after firing him, alleging that they had cause for doing so (which is believed to be McCloughan’s struggles with alcoholism). McCloughan’s contract requires him to file a grievance with the league rather than file suit in an independent court, which is standard among contracts for front-office employees and coaches, who are not represented by a union.

Now let’s take a look at more notes from the league’s east divisions: