After dealing Robbie Anderson and Christian McCaffrey, the Panthers seem unwilling to strip away pieces from their homegrown young core. Brian Burns‘ name has headlined this group, but teams have still discussed the fourth-year defensive end with the Panthers.

The Panthers look to have made it known they do not want to deal Burns, and Adam Schefter of ESPN.com noting the team turned down an offer of two first-round picks for the Pro Bowl pass rusher. Burns would make for a lower-profile addition to the exclusive club of defenders dealt for two first-round picks in recent years. Khalil Mack, Jalen Ramsey and Jamal Adams each had an All-Pro nod on their respective resumes by the time they were moved for packages fronted by two first-rounders. Burns is a one-time Pro Bowler. 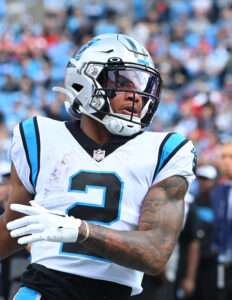 That report also surprised various teams around the league. A high-ranking exec said the Panthers wanted first- and second-round picks for Burns during his team’s talks with Carolina, per Jason La Canfora of the Washington Post. Other evaluators surveyed here believe that if the Panthers were indeed offered two firsts for Burns they should take it, JLC adds. Burns, 24, is moving toward a second Pro Bowl season, but the former first-rounder has yet to cross the 10-sack barrier in a campaign.

Still, the Panthers should be considered unlikely to deal Burns, D.J. Moore or Jeremy Chinn. The Panthers have also told teams they are not trading Derrick Brown or Jaycee Horn, Schefter adds. Brown can be controlled through 2024 and Horn through 2025, via the fifth-year option. The Panthers have made Shaq Thompson available, but the Burns-Chinn-Moore-Brown core — which is naturally more appealing to teams due to the performers’ ages — is being protected. The Panthers continue to discuss Moore with teams, however, La Canfora adds. Thus far, the team is resisting this trade interest.

The Rams are viewed as a team likely to have made a strong offer for Burns, La Canfora adds, with The Athletic’s Jourdan Rodrigue indicating the team should be expected to pursue edge players before the deadline (Twitter link). Los Angeles has acquired Ramsey, Von Miller and Dante Fowler at recent trade deadlines, using Day 1 and Day 2 picks to land these defenders. The Fowler and Miller moves helped those respective Rams editions to Super Bowls. The Rams do not have their 2023 first-round pick. That would seem to impact any Burns pursuit, though the team could likely land other potentially available edges without a first-rounder being necessary.

Miller choosing the Bills in free agency set back the Rams’ pass rush, however. Leonard Floyd entered the season as the defending champions’ top edge rusher; the $16MM-per-year sack artist is sackless through six games. Although Ramsey and off-ball linebacker Bobby Wagner have two sacks apiece, Aaron Donald (four) is the only Rams rusher to have registered more than one sack this season.

Carolina has added three 2023 picks, two 2024 choices and a 2025 selection for dealing McCaffrey and Anderson. Moving Thompson, 28, would add to this growing draft arsenal. But Carolina’s collection of young talent — on display during the team’s 21-3 Week 7 win over the Buccaneers — figures to still come up in conversations ahead of the Nov. 1 deadline. Trading one of those players could move the needle further for GM Scott Fitterer, a Matt Rhule-era hire who should not be considered — based on how David Tepper proceeded with former GM Marty Hurney during Rhule’s time — a lock to be the one making these draft picks. That said, Tepper backed Fitterer in the wake of Rhule’s firing.