The Eagles extended backup lineman Le’Raven Clark today. Per the team, the offensive lineman inked a new deal that will keep him in Philadelphia through at least the 2022 season.

After spending the first four seasons of his career with the Colts, the former third-round pick joined the Eagles this offseason. He didn’t make the team at the end of the preseason, but he re-joined the organization via the practice squad days later. After appearing in 47 games (15 starts) through his first four years in the NFL, Clark has only seen time in two games this season, with all six of his snaps coming on special teams.

The Eagles weren’t done making moves today. According to Jeff McLane of the Philadelphia Inquirer on Twitter, Philly waived cornerback Mac McCain. The undrafted rookie out of North Carolina A&T has traveled plenty during his first season in the NFL. He spent the preseason with the Broncos, he later caught on with the Eagles, he was claimed again by Denver, and then he was claimed a second time by Philly. The 23-year-old has seen time in one game this season, collecting 13 special teams snaps for the Eagles in Week 3.

Former Broncos cornerback Mac McCain was a popular player on the waiver wire. Before he was awarded to the Eagles, the Chargers also submitted a claim for him, according to Mike Klis of 9News (on Twitter). 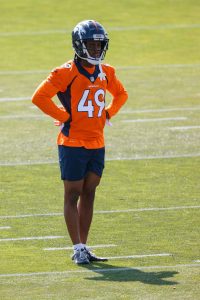 The Chargers could have used an extra CB with Asante Samuel Jr. in concussion protocol. But, beyond that, they probably would have benefitted from McCain’s intel as they prepare to face the Broncos on Sunday. After all, there isn’t a ton of game tape out there on the 23-year-old — he’s played in just one game this year with 13 special teams snaps.

Interestingly, McCain has spent the year bouncing back and forth between the Broncos and Eagles. In May, he signed with Denver as an undrafted free agent out of North Carolina A&T. Then, in September, Philly plucked him off of the Broncos’ taxi squad. Then, when the Eagles waived him a few weeks ago, the Broncos claimed him. This week, when Denver cut him, Howie Roseman brought him back.

Eventually, McCain may get an opportunity to stay in one place. After all, he is a two-time All-MEAC player with multiple pick-sixes on his collegiate resume. For now, McCain will take the place of Davion Taylor on the roster, now that the linebacker is on IR.

The Eagles, winners of two straight, will try for three in a row when they face the Giants on Sunday.