Samuels, a 2020 UDFA, spent much of his rookie campaign in the Packers organization. He ended up getting into a pair of games for Green Bay, seeing most of his time on special teams. He had a brief stint on the Bears practice squad in 2021 before joining the Raiders this offseason.

Archibong joined the Bears as an undrafted free agent last offseason. The Temple product eventually made his way to the Steelers organization, and he ended up collecting a pair of tackles in two games. He saw time on 13 defensive snaps and six special teams snaps during the 2021 campaign. 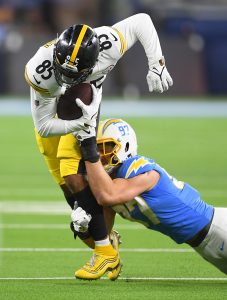