One day after their breakout star defender tested positive for COVID-19, the Cowboys learned of another positive test from a key piece to their offense. Starting left tackle Tyron Smith has been placed on the Reserve/COVID-19 list, per NFL Network’s Ian Rapoport (via Twitter). 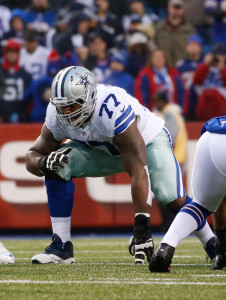 Micah Parsons tested positive on Wednesday, which in all likelihood ended his rookie season. The fact that Smith tested positive one day later, of course, makes his absence for Saturday’s game against the Eagles even more likely. Smith has already missed four games this year, including Week 15 most recently. Those absences have been related to ongoing ankle issues, and come after he was only able to suit up for two games last year. Without Smith, look for Terence Steele or Ty Nsekhe to fill in at left tackle.

The silver lining to the news for Dallas is the fact that they have already clinched the NFC East title, rendering the game against Philadelphia – which has also clinched a playoff spot – relatively meaningless. On the other hand, NFL Network’s Jane Slater reports that there are “a few players feeling under the weather today”, and that cornerback Anthony Brown has also tested positive.

The Cowboys’ COVID-19 situation will be worth monitoring in the coming days, as the team ultimately prepares for the postseason starting next week.