Two veterans that have been stashed on the Bills practice squad are set to make their season debuts for the team this week. Buffalo has elevated cornerback Xavier Rhodes and running back Duke Johnson for this weekend’s matchup against the Vikings.

The Bills are extremely deep at cornerback, but an injury to first-round rookie Kaiir Elam has him currently listed as doubtful going into Sunday. With Elam out, Dane Jackson would be expected to start opposite Tre’Davious White at cornerback, with Taron Johnson and Siran Neal providing key snaps off the bench. That’s still a reliable amount of depth but adding the veteran Rhodes will provide the Bills with just a bit more security if Elam can’t play.

This has been an interestingly quiet season for Rhodes, who started at least 13 games in every season dating back to his sophomore season before this year. The longtime shutdown cornerback for the Vikings spent two years doing more of the same in Indianapolis before signing to the Bills practice squad in the offseason. After eight years as a fulltime starter, coming in off the practice squad is an unfamiliar role for the 32-year-old.

The Bills traded for another former Colt in running back Nyheim Hines at the deadline in an attempt to bring in a back who can catch passes out of the backfield, something that the team was lacking with Devin Singletary, Zack Moss, and James Cook. The elevation of Johnson from the practice squad may indicate that Hines is not totally comfortable enough with the playbook to take hold of that role yet.

Johnson spent the majority of his career as one of the league’s premier pass-catching running backs. Over his career, Johnson has more receiving yards (2,870) than rushing yards (2,261). He’s an effective weapon, even at 29-years-old, that the Bills have kept stashed on the practice squad all year. Johnson was given an opportunity to start for a depleted Dolphins team last year and rewarded them with two 100-yard rushing performances and three touchdowns in four starts.

Many, including NFL Network’s Ian Rapoport, noted that Buffalo was not elevating quarterback Matt Barkley, indicating that the team is confident that starter Josh Allen will be able to play after sustaining an elbow sprain last week. Allen had been limited in practice this week but was able to grip the ball and provide enough for the Bills staff to show that he can start.

The list of notable names being released continues to grow. The Bills are parting ways with veteran tight end O.J. Howard, reports ESPN’s Adam Schefter (Twitter link). In a separate tweet, he also confirms that running back Duke Johnson is being released. 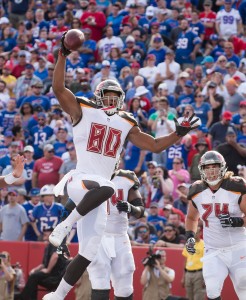 Neither moves comes as a complete surprise given recent developments. Howard had put forth underwhelming performances in training camp and the preseason; the fact that he was receiving a large workload with the team’s backups and third-stringers led to speculation last week that he could be on the outside looking in during roster cuts. Given the maximum value of the one-year deal Howard signed in Buffalo ($5MM), a trade always seemed unlikely in this situation.

The former first-rounder spent five seasons with the Buccaneers, putting up consistent numbers during his first three years. His career-high of 34 catches and 565 yards has never been improved upon, however, leading to his departure in free agency and arrival in Buffalo as a backup to Dawson Knox.

The move points to Quintin Morris and Tommy Sweeney taking on larger roles as rotational players behind Knox. Howard, meanwhile, will need to quickly find a new landing spot, where a depth role (and, presumably, a much less lucrative deal) will again be the target. Buffalo will save $2.25MM by releasing him.

The situation is different for Johnson. As Schefter notes, the Bills are eyeing a return for the veteran on their practice squad if he declines to sign elsewhere. The team has been projected to use a three-man committee of Devin Singletary, Zack Moss and second-round rookie James Cook. That trio, not to mention QB Josh Allen, left a rather narrow path to the 53-man squad for Johnson.

The 28-year-old began his career in Cleveland, where he posted 1,000 scrimmage yards for the first (and only) time in 2017. He has since played in Houston and, beginning late last season, Miami. With a 4.6 yards per carry average during the latter stop, he demonstrated value as at least a quality backup – something he is more likely to become elsewhere. As a vested veteran, he is not subject to waivers and can sign anywhere in free agency.

The Dolphins were busy reworking their running backs depth chart during the offseason. After signing the likes of Chase Edmonds, Sony Michel, and Raheem Mostert, the team didn’t have much room for another veteran. Speaking to Barry Jackson of the Miami Herald, running back Duke Johnson said Miami never offered him a contract in free agency.

The veteran had a productive five-game stint with the Dolphins in 2021. After making a name for himself in the passing game, Johnson averaged 66 rushing yards per game…a leap from his 23.6-yard career mark. The 28-year-old RB ultimately finished the campaign with 371 yards from scrimmage and three scores on 75 touches. The organization initially expressed interest in re-signing Johnson following the season, but Mike McDaniel’s hiring ultimately changed the team’s plans.

“They just wanted to go in a different direction,” Johnson said. “I figured McDaniel wanted his guys; Raheem Mostert is one of his guys. I know the nature of the business. No hard feelings.”

Johnson ended up landing a one-year deal with the Bills in March.

More notes out of Miami…

The Bills could not pry J.D. McKissic from Washington, though the sides were believed to have an agreement. Buffalo will instead pivot to an AFC veteran back.

Duke Johnson is signing a one-year deal with the Bills, Adam Schefter of ESPN.com tweets. The veteran pass-catching back will come over from the Dolphins, who have added multiple starter-caliber backs since free agency opened.

Formerly with the Browns and Texans, Johnson spent much of the 2021 season off the radar. But he resurfaced with the Dolphins down the stretch. Johnson ripped off two 100-yard rushing performances with Miami, helping the team to wins over the Jets and Patriots. He averaged 4.6 yards per carry with the Dolphins, who added him via a practice squad agreement during the season. With Raheem Mostert and Chase Edmonds now on the Mike McDaniel-led team, Johnson will head north.

Buffalo still rosters Devin Singletary and Zack Moss on their respective rookie contracts, but the team was clearly eyeing backs with aerial skillsets this offseason. Brandon Beane expressed frustration McKissic’s agreement fell through. McKissic is still with Washington. In the 28-year-old Johnson, the Bills have a player who has topped 400 receiving yards in five of his six seasons. With the Browns, Johnson exceeded 500 receiving yards three times.

He clearly earned it. The Dolphins are set to promote running back Duke Johnson to the active roster (Twitter link via Adam Schefter of ESPN.com).

Johnson, 28, spent much of the year on the workout circuit. After auditions for the 49ers, Panthers, and Saints didn’t result in deals, he settled for a practice squad contract with the Dolphins in October. Yesterday, in his first start of 2021, Johnson torched the Jets for 107 rushing yards and two touchdowns off of 22 carries. The Dolphins — against some creative play calling from the Jets — won 31-24, advancing to 7-7 on the year.

Johnson was the focal point of the Dolphins’ offense, even though Myles Gaskin and Salvon Ahmed were cleared in time to play. Elevated in place of Phillip Lindsay, who was still held out due to COVID-19 protocols, the veteran kept the chains moving throughout the afternoon.

Historically, Johnson has been known for his pass-catching ability, as shown by his 400+ receiving yards in each of his first five seasons. But, on Sunday, he did most of the damage with his feet, save for a 20-yard grab in the third quarter. He might just be the bell cow moving forward as the Dolphins scrap for a playoff berth. The AFC East may be out of reach, but the ‘Fins still have a 10% chance at capturing a Wild Card spot, per Five Thirty Eight. 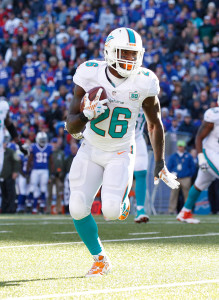