The Patriots are bringing in a familiar face for some defensive depth. New England has agreed to terms with free agent linebacker Harvey Langi, his agent Kenny Zuckerman tweets. 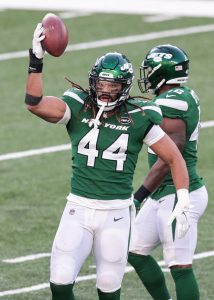 Pats fans may remember Langi, since the team signed him as an undrafted free agent back in 2017. At the time he was arguably the most sought after undrafted free agent of the class, as the Patriots gave him over $100K guaranteed to sign with them. He ended up only appearing in one game as a rookie, and spent most of the year on the NFI list as the result of a car crash.

He was waived at final cuts the following year, and quickly scooped up by the Jets. After spending 2018 on New York’s practice squad, he began to make a real impact in 2019. Langi played in 30 games with the Jets the past two years, starting nine.

In 2020 he started six games, finishing with 60 tackles. Despite playing 45 percent of the defensive snaps, the Jets elected not to tender him as a restricted free agent this offseason. Now, he’s getting another chance to impress Bill Belichick.