The Titans made a number of moves today as they prepared for their Week 15 matchup against the Chargers. Most notably, the team placed running back Dontrell Hilliard on injured reserve and activated cornerback Lonnie Johnson Jr. from IR. 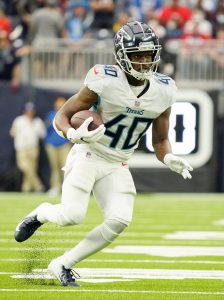 Hilliard suffered a neck injury in last Sunday’s loss to the Jaguars. The running back has turned into a reliable offensive option during his second season in Tennessee, serving as the team’s primary pass-catching back (21 receptions for 177 yards and four touchdowns). As Titans reporter Paul Kuharsky notes on Twitter, the team doesn’t really have a replacement for Hilliard on the roster. Rookies Hassan Haskins and Julius Chestnut will now be relied on to spell Derrick Henry.

After getting waived by the Chiefs during the preseason, Johnson caught on with the Titans. He got into eight games for Tennessee, with the majority of his playing time coming on special teams. The defensive back suffered a hamstring injury during the Titans’ Week 10 win over the Broncos, landing him on IR. The former second-round pick started 19 games for the Texans through his first three seasons in the NFL.

The Titans also signed guard Jordan Roos, cornerback Davontae Harris, and Chestnut to the active roster and promoted wideout Mason Kinsey and linebacker Andre Smith from the practice squad. Tennessee also placed wide receiver C.J. Board on IR. Board suffered a rib injury earlier this month and will now miss the rest of the regular season. Since joining the active roster in November, Board has served as the team’s primary punt returner.