The Bills have agreed to terms on a new two-year contract with wide receiver Isaiah McKenzie, according to Adam Schefter of ESPN. The deal is reportedly worth $8MM, the biggest payday McKenzie has seen in his five-year career. 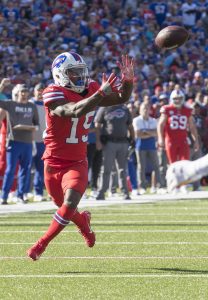 McKenzie was picked up by the Bills off waivers after being waived by the Broncos, who drafted him in the 5th round of the 2017 NFL Draft. After finishing out that initial contract in Buffalo, he rode out two one-year deals in 2020 and 2021 worth around $1MM each.

His first year in Buffalo saw him used as the primary kick returner and a bit of a gadget player on offense, receiving and helping out in the rushing game after injuries to running backs LeSean McCoy and Chris Ivory. In his first full season as a Bill, his returner role was diminished with the addition of Andre Roberts, but he continued as a special teamer and gadget player, even contributing in Week 17 as a reserve cornerback.

After re-signing on his first one-year deal in Buffalo, McKenzie saw his most productive season in 2020. McKenzie saw career highs in receptions (30), receiving yards (282), and receiving touchdowns (5). He also recorded his first special teams touchdown on an 84-yard punt return.

The 2021 NFL season didn’t see a large change in McKenzie’s offensive production, but he re-cemented his role as the team’s return specialist, which appears to be the basis for his new contract. McKenzie did see his role on the offense increase a bit when Cole Beasley missed time due to COVID-19.

With star-receiver Stefon Diggs and Beasley set to return, along with Gabriel Davis who emerged as the team’s third receiver for the future, this signing gives the Bills a solid one through four in their receiving corps, with McKenzie set to continue handling return duties.

The Bills are keeping their gadget player. Buffalo has agreed to terms on a new deal for receiver/returner Isaiah McKenzie, his agency announced on Twitter. It’s a one-year deal worth $1.15MM with $350K guaranteed, Ian Rapoport of NFL Network tweets.

Before he decided to re-sign with the Bills, the Bears were a team that expressed interest in McKenzie as a free agent, a source told Jeremy Fowler of ESPN.com (Twitter link). McKenzie entered the league as a fifth-round pick of the Broncos back in 2017. He struggled fielding punts, was cut midway through the 2018 season, and promptly claimed by Buffalo. Since then, he’s turned into a very nice find for Sean McDermott.

On his only punt return of the season in 2020, he returned it 84 yards four a touchdown. He couldn’t be the normal returner due to the presence of All-Pro Andre Roberts, but with Roberts signing in Houston McKenzie should be the return guy in 2021.

He also carved out a sizable role on offense, playing around a quarter of the offensive snaps last year. He finished with 30 catches for 282 yards and five touchdowns, and also had ten carries.

When the Bills assessed their restricted free agent situation, Isaiah McKenzie did not receive a tender offer. But the wide receiver/return man will stay in Buffalo nonetheless.

McKenzie agreed to re-sign with the Bills, according to his agents (on Twitter). He has been with the Bills since they claimed him on waivers in 2018. This deal will certainly be less than the original-round tender price ($2.13MM).

A former Broncos fifth-round pick, McKenzie could not stick in Denver due to fumbling issues. But he established himself as a role player in Buffalo. The 5-foot-8 wideout caught 27 passes for a career-high 254 yards and a touchdown last season. He will attempt to play a role in a receiving corps that now includes Stefon Diggs.

Having signed Andre Roberts, the Bills did not use McKenzie as much in the return game last season. McKenzie, 24, served as the Bills’ primary return man down the stretch in 2018. Roberts is under contract for 2020, but the Bills are bringing McKenzie back regardless.

The Broncos announced the promotion of wide receiver Isaiah McKenzie from the practice squad to active roster. McKenzie will fill the roster spot vacated by Wednesday’s release of Chad Kelly. 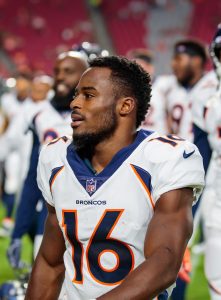 The Broncos had good reason to promote McKenzie to the varsity squad. The Bills were trying to sign the Georgia product recently, and the Broncos did not want to let McKenzie leave.

McKenzie, 23, was a fifth-round pick of the Broncos last year. He appeared in eleven games with the majority of his work coming on special teams. McKenzie returned 21 punts for 183 yards (8.7 yards per attempt) and three kickoffs for 50 yards.

For now, the Broncos are moving forward with Case Keenum and Kevin Hogan as their only quarterbacks on the roster. The Broncos may want to consider adding another QB to the mix soon, particularly given Keenum’s struggles this year.