The Jets’ offense has been dealt another massive blow on the injury front. Head coach Robert Saleh announced on Monday that offensive lineman Alijah Vera-Tucker is out for the remainder of the season due to a triceps tear (video link). 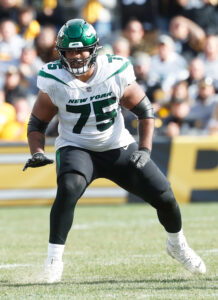 Saleh added that Vera-Tucker will require surgery to repair the damage suffered during yesterday’s win over the Broncos. The news marks another significant loss on the offensive line, a unit which was already dealing with numerous injuries in 2022.

The tackle spot has been a particularly sore one for Gang Green. Mekhi Becton was ruled out for the season prior to Week 1 due to his most recent knee injury. That precipitated the signing of veteran Duane Brown, who was unable to make his Jets debut until Week 5. George Fant, meanwhile, was slated to serve as the team’s starting right tackle after the addition of Brown, but he is on IR as a result of a knee injury. Saleh indicated that it is unlikely Fant will be activated this week.

Given the uncertainty along New York’s offensive front, Vera-Tucker has had to wear multiple hats in 2022. Seeing time at both tackle spots, along with right guard, the 2021 first-rounder has filled in as needed along the line. That marks a significant change from last season, when the USC alum played exclusively at left guard – the spot now occupied by free agent signing Laken Tomlinson.

Given a solid PFF grade of 75.2 in run blocking this year, Vera-Tucker had not fared as well in pass protection. The 23-year-old was charged with 16 pressures allowed, leading to a 61.4 rating. Still, his absence will be felt on a Jets’ offense which just lost starting running back Breece Hall for the remainder of what had been a promising season. Saleh said Cedric Ogbuehi will step in as the team’s starting right tackle.

The 5-2 Jets will look to move ahead with a depleted offense and maintain their early success beginning on Sunday when they host the Patriots.

The Houston Texans will reportedly sign offensive tackle Cedric Ogbuehi to a one-year deal, according to Ian Rapoport of NFL Network. Ogbuehi has become a bit of journeyman over the past couple of years as he’s set to join his sixth NFL team. 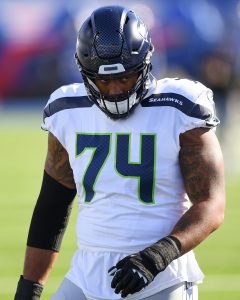 Ogbuehi was a first-round pick for the Bengals in the 2015 NFL Draft. After having his fifth-year option declined, Ogbuehi played a year each in Jacksonville and Seattle. He re-signed with the Seahawks for the 2021 season, but was placed on injured reserve before the season began and was released shortly after coming off IR. Ogbuehi signed with the Ravens, appearing in two games before getting released, and spent two days after that on the Titans’ practice squad.

Ogbuehi will find a familiar face in Houston, who just hired George Warhop a few weeks ago to coach their offensive line. Ogbuehi worked with Warhop when he played for the Jaguars in 2019.

After a little over a month in Baltimore, offensive lineman Cedric Ogbuehi‘s time as a Raven has come to an end. After being ruled out of the Ravens’ upcoming game in Pittsburgh with a thigh injury, the Ravens decided to waive the former first rounder, as reported by Jamison Hensley of ESPN.

The seven-year veteran was signed on October 27, one day after being released by the Seahawks, as a bit of insurance following the Ravens placement of their star blindside blocker, Ronnie Stanley, on the IR. After losing Stanley, Baltimore was relying on long-time Steeler Alejandro Villanueva at left tackle and utility-offensive lineman Patrick Mekari, who has started games at every position on the offensive line in his three years of professional football, at right tackle. The Ravens never needed to resort to Ogbuehi at tackle as the only game time he saw in Baltimore was on special teams.

For any teams looking for depth on the offensive line, Ogbuehi presents an intriguing option, provided he can get healthy, with a good amount of starting experience (30 starts out of 60 games played), with his most recent start coming in Week 4 of this season for Seattle.

Cedric Ogbuehi will be returning to the AFC North. The former Bengals first-round pick agreed to terms with the Ravens on Wednesday, Mike Garafolo of NFL.com tweets. 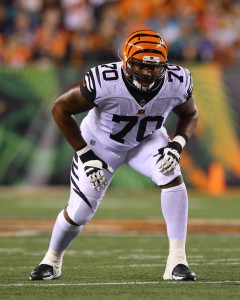 This is a practice squad agreement, though Garafolo adds Ogbuehi is expected to be bumped up to Baltimore’s active roster soon. The Ravens have a bye this week, but starting right tackle Patrick Mekari is dealing with a high ankle sprain.

It did not take long for Ogbuehi to find a new home. The Seahawks released the seventh-year veteran Monday, and the Ravens brought him in for a Tuesday workout. The sides will move forward together, with the Ravens set to be Ogbuehi’s fourth NFL team.

Injuries have certainly affected the Baltimore offense this season, and none is bigger than Ronnie Stanley‘s season-ending setback. Alejandro Villanueva is back as a left tackle, with Mekari moving from an interior role to right tackle. Ogbuehi, 29, began the season on Seattle’s IR list but was activated for Week 4, when he started against San Francisco. That marks the only game Ogbuehi has played this year.

Cedric Ogbuehi‘s stint with the Seahawks has come to an end. Earlier today, Seattle released the veteran offensive tackle, per NFL Network’s Mike Garafolo (via Twitter).

The former first-round pick dealt with a biceps injury that forced him to miss the first chunk of the season. He was activated from IR when first eligible, and he started Week 4 while playing 86 percent of his team’s offensive snaps. He hasn’t seen the field since that time, and Seattle ultimately decided to move on from the 29-year-old.

Ogbuehi played just eight games with Seattle in 2020, starting four, but he did just enough to return to the Seahawks — his third NFL team. The Bengals drafted Ogbuehi in 2015, but after not meeting expectations, the Texas A&M product had to settle for a low-cost Jaguars deal in 2019 before coming to Seattle.

With 58 games (30 starts) on his resume, Ogbuehi will likely catch on with a squad that needs some extra depth on their offensive line.