DECEMBER 8: Mitchell landed on the Jets’ NFI list because of blood clots, according to Connor Hughes of SNY (on Twitter). This is not believed to be a career-threatening matter, but Mitchell is done for this season.

DECEMBER 7: A Jets starter in five games this season, Max Mitchell will miss the rest of this campaign. Robert Saleh said Wednesday (via ESPN.com’s Rich Cimini, on Twitter) the rookie tackle is going on the team’s reserve/non-football injury list and will be shut down for the season’s remainder.

Chosen in the fourth round, Mitchell became needed due to the Jets’ run of tackle injuries this year. Mekhi Becton, Duane Brown and George Fant‘s health issues moved Mitchell into earlier-than-anticipated playing time, but that run of work will abruptly cease. It is unclear what will cause Mitchell’s shutdown, but the Jets will lose some depth at a fluctuating position. 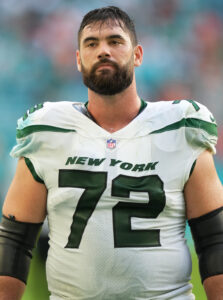 The Jets used Mitchell as their right tackle starter in their Week 12 loss to the Vikings, but the team benched him for Fant. Taking an extended period to return from an early-season knee injury, Fant is now on track to start opposite Brown. The ex-Seahawks have not started together as Jets, but that will occur in Week 14 against the Bills.

New York began the season without Becton and Brown. Becton suffered an avulsion fracture during training camp and is out for the season, while Brown — added in the wake of the Becton injury — went down just before the year as well. Brown has since returned and has been the Jets’ left tackle starter, but Fant needed more than two months to re-emerge from the knee injury that plagued him early this season. That brought Mitchell into action.

A Louisiana alum, Mitchell started in Weeks 1-4 and returned from his own injury in Week 12. The Jets, who had been starting Cedric Ogbuehi at right tackle, used one of their injury activations on Mitchell last month. Continuing Gang Green’s run of health issues at this position, Ogbuehi missed Week 13. Not long after the Jets allowed the Patriots to sign Conor McDermott off their practice squad, Mitchell will move out of the picture.

The Jets are bumping recently re-signed guard Laurent Duvernay-Tardif to their active roster, Cimini tweets. The longtime Chiefs starter-turned-Jets trade acquisition is back from his second medical sabbatical; the Canadian doctor/lineman has 64 career starts on his resume. The Jets have been playing without 2021 first-round pick Alijah Vera-Tucker as well. Vera-Tucker had played both guard and tackle this season, moving to the latter spot due to the injuries the team sustained at that position. Duvernay-Tardif appears likely to provide depth behind starters Laken Tomlinson and Nate Herbig.

5 comments on “Jets T Max Mitchell Out For Season”