Cincinnati will host the Ravens in the Wild Card round of the playoffs this weekend, but they will have to do it without two of their starters on the offensive line, according to Mitch Stacy of The Associated Press. Head coach Zac Taylor confirmed that right guard Alex Cappa will join right tackle La’el Collins on the sideline this Sunday night.

Cappa had his ankle rolled over late in the third quarter last week while blocking in the pocket. Initial fears were that the injury would end his season, keeping him out for the entirety of the playoffs, and while Taylor is holding out hope for future games this January, we know that Cappa will not play this weekend.

Cappa joins Collins, who saw his season come to an end after suffering a knee injury in a Week 16 win over the Patriots. Collins has been replaced by Hakeem Adeniji who played in a backup role this season after starting 13 games last year. Adeniji drew criticism for his pass protection in the playoffs last season, when the offensive line drew most of the blame for the team’s loss in Super Bowl LVI.

Cappa will be replaced by backup Max Scharping. After starting 33 games in his first three seasons with the Texans, Scharping was picked up by the Bengals after being waived just prior to the season. The offensive line was a huge weakness last year for a Bengals team that still made it to the Super Bowl. They may have to struggle over that hurdle once again if they want to win it all in February.

Here are a couple other injury rumors from around the AFC, starting with another playoff squad:

Here are the league’s minor transactions leading into the Sunday-slate of Week 13 games:

Kendall Lamm is heading to Detroit. The Lions announced that they have signed the free agent offensive tackle. 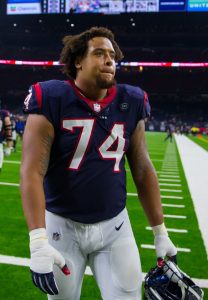 Despite going undrafted in the 2015 draft, Lamm has put together a respectable seven-year career. He spent the better part of those seven seasons with the Texans, where he started 24 of his 55 appearances. He spent a pair of seasons in Cleveland before joining the Titans last August.

The 30-year-old ended up seeing time in 12 games (one start) for Tennessee last season, and he pretty much split his playing time between offense and special teams. Lamm didn’t play enough snaps to qualify for Pro Football Focus’ rankings, but his score would have ranked toward the bottom of the OT list. However, the site was much more favorable of his performances in 2020 and 2019, and despite his ugly 2021 score, he still earned a solid grade in run blocking.

The Lions don’t have a whole lot of offensive tackle depth behind starters Taylor Decker and Penei Sewell. Lamm will be competing with the likes of Dan Skipper, Matt Nelson, and Darrin Paulo for backup reps.

The Titans are releasing offensive tackle Kendall Lamm, according to Aaron Wilson of Pro Football Network (Twitter link). Lamm had one more year to go on his contract, but the Titans opted for extra cap space instead.

Lamm joined the Titans on a two-year pact worth $8.5MM last spring. Up until that point, the undrafted free agent out of Appalachian State spent the first four seasons of his career with the Texans, followed by two years with the Browns. Lamm was limited to just four games during his first season in Cleveland, but he got into 15 games (one start) for the Browns in 2020, appearing on 116 offensive snaps and 68 special teams snaps.

His Titans run was spent mostly as a reserve with one start out of 12 appearances. All in all, the 29-year-old (30 in June) has 86 games on his resume and 28 starts.