Although the Chiefs reconfigured their offensive line after Super Bowl LV, they still depended on Andrew Wylie frequently as a substitute last season. They will bring back the veteran for 2022. 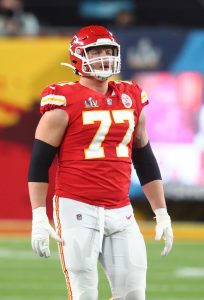 The Chiefs reached a one-year, $2.5MM agreement to re-sign Wylie, Ari Meirov of Pro Football Focus tweets. Wylie sought a Kansas City return, per the KC Star’s Herbie Teope (on Twitter), and this will be the versatile blocker’s fifth season with the team.

A UDFA addition in 2018, Wylie worked as a near-full-time starter at guard from 2018-20. The Chiefs used Wylie at guard in Super Bowl LIV but needed him to play right tackle in Super Bowl LV. The Buccaneers’ pass rush made most Chiefs O-linemen’s nights miserable in that game, but the Chiefs kept Wylie on a one-year, $920K deal in 2021. Wylie, 27, started games at both guard spots and right tackle last season.

While Wylie has been unable to turn his extensive first-string work into a lucrative contract, he has been a regular despite coming into the league undrafted out of a mid-major program (Eastern Michigan). The Chiefs have locked-in starters at four of their five spots (Orlando Brown, Joe Thuney, Creed Humphrey and Trey Smith) but still have questions at right tackle. Wylie’s experience here figures to make him a swing option, at worst, for 2022.

Chiefs’ OL Lucas Niang Out For Rest Of Season

According to a tweet from NFL Network’s Ian Rapoport, Andy Reid informed reporters, after the Chiefs’ loss to the Bengals today, that tackle Lucas Niang suffered a torn patellar tendon. Worries were high for the second-year lineman when he needed to be carted off early in the first quarter. Unfortunately, this type of injury not only prevents Niang from returning this year, but, even after extensive rehabilitation, it could hamper Niang for years to come.

Niang was a third-round pick for the Chiefs two years ago, but was one of several players who opted out of the 2020-21 NFL season due to COVID-19 concerns. In what is effectively his rookie season, Niang has been a key player on the line, starting 8 games this season while dealing with some injuries and spending some time on the reserve/COVID-19 list.

Kansas City was already short their other starting tackle, Orlando Brown, as he was scratched early this morning with a calf injury. The Chiefs pushed guard Joe Thuney to left tackle and relied on Andrew Wylie at right tackle. Wylie has been filling in for Niang this year and Kansas City will likely continue to depend on him into the playoffs. The loss of Brown is much more concerning for the immediate future and they will hope to get him back in time for a January run.

As for Niang, a speedy and efficient recovery is the best hope. Tears of the patellar tendon have a penchant for ruining careers. While players have been known to rehab and return, few have looked like their former selves after. Players like former Giants’ receiver Victor Cruz and former Buccaneers’ running back Cadillac Williams have returned to play only to look like shadows of their former selves. Longtime former Patriots’ linebacker Jerod Mayo retired shortly after his diagnosis.

Bears’ tight end Jimmy Graham is a rare example of a player who returned to play and continued being his dominant self. After Graham was traded to the Seahawks, he never quite reached the thousand-yards-receiving-coupled-with-double-digit-touchdown seasons of his days with the Saints, but, after tearing his right patellar tendon in his first season in Seattle, Graham returned to Pro Bowl play each of the next two years and set a Seahawks’ franchise record for single season touchdowns by a tight end with 10 in 2017.

We obviously hope for a best case scenario outcome like this as Niang deals with one of football’s biggest nemeses. Torn patellar tendons have ruined too many careers before they began. Our hopes go out to Lucas as he prepares to tackle a daunting injury and we wish him a long and healthy career.

Much has changed on the Chiefs’ offensive line since Andrew Wylie suited up for Super Bowl LV. Despite the team’s near-complete overhaul up front, Wylie will be back in the fold.

Since extending that tender offer, the AFC champions have been busy up front. While Wylie has been a primary guard starter in each of his three Chiefs seasons, the team gave Joe Thuney a guard-record contract and brought former Pro Bowler Kyle Long out of retirement. Longtime right guard starter Laurent Duvernay-Tardif is also expected to play in 2021. A doctor, Duvernay-Tardif was the first NFLer to opt out of last season; he focused on his other career amid the early months of the COVID-19 pandemic. The Chiefs also drafted Tennessee prospect Trey Smith in Round 6. Smith was widely viewed as a player whose talent warranted a higher-round selection, but medical red flags pushed him down the draft board.

While each of these non-Thuney cogs bring some uncertainty, the Chiefs have beefed up this position considerably this offseason. Wylie, 26, has started 35 games as a pro. Pro Football Focus graded the Eastern Michigan product as a top-30 guard in 2018 and ’19 but slotted him near the bottom at the position last season.

The Chiefs plugged Wylie in at right tackle for Super Bowl LV, following Eric Fisher‘s Achilles tear. That did not go well. But Wylie will have an opportunity to re-establish his value in 2021, ahead of a potential unrestricted free agency bid next year.

The Chargers announced that they have placed tight end Hunter Henry on injured reserve due to a small laceration on his kidney. In related moves, the Bolts promoted guard Brett Boyko to the active roster and signed tackle Andrew Wylie to the practice squad.

Henry suffered the painful injury during Saturday night’s game against the Chiefs. It’s a tough loss for the Chargers as they try and fight their way into the playoffs. The Chargers face long odds of winning the AFC West, but they have a slightly better chance of securing the final Wild Card spot in the AFC. In order to have any chance at the postseason, the Chargers will have to beat the Jekyll-and-Hyde Jets this weekend.

Henry’s year ends with 45 catches for 611 yards and four touchdowns. As of this writing, he is tied for second with Melvin Gordon in team receiving TDs, and third in catches and yards. The advanced metrics were also a huge fan of his work. Henry placed third amongst all tight ends in performance this year, according to Pro Football Focus.