Nearing the end of his activation window, Carson Wentz has officially been brought back into the fold. The Commanders announced on Monday that the veteran quarterback has been activated from IR. 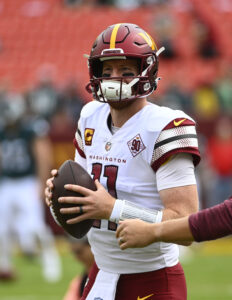 Washington had until Wednesday to do so, or else Wentz would have been ineligible to return this season. The news comes as little surprise given the timing of the Commanders’ decision to designate him for return, but will do little with respect to the team’s pecking order under center. Wentz will dress as the backup to Taylor Heinicke on Sunday against the Giants.

That falls in line with what head coach Ron Rivera indicated while Wentz was on IR due to a fractured finger. Heinicke has started each game for the Commanders since Week 7, a stretch in which the team has gone 5-1-1. The former UDFA has played at a similar level to last season, when he started 15 contests and drove Washington’s pursuit of an upgrade at the position during the offseason.

That resulted in Wentz being traded for the second consecutive year, and renewed optimism from some that another change of scenery could allow him to resurrect his career. Instead, the 29-year-old put up largely underwhelming numbers in his six starts before suffering the injury. The former No. 2 overall pick has two years remaining on his contract, which the Commanders acquired in full as a result of their swap with the Colts. That deal will, in all likelihood, see Indianapolis receive a third-round pick in 2023 – rather than a second-rounder – given the time Wentz has missed with respect to the snap condition attached to the selection.

In a corresponding move, the Commanders have placed center Tyler Larsen on IR. During the team’s first game against the Giants, he was carted off the field with a dislocated kneecap. That led to an expectation of a prolonged, if not season-ending, absence, so an IR stint is not surprising. Larsen will miss at least the next four weeks now, as the Commanders will search for another Chase Roullier replacement in the middle of their offensive line.

Stemming from a December 2021 injury, Tyler Larsen began this season on Washington’s reserve/PUP list. Larsen may end his season on a Commanders injured list as well. 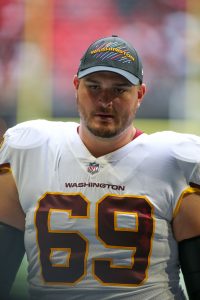 Larsen left the Commanders’ Week 13 tie against the Giants via cart, and The Athletic’s Ben Standig tweets the veteran blocker suffered a dislocated kneecap. This injury will sideline Larsen indefinitely and could well shut him down for a second straight year. This will sideline a second Commanders center this season; the team lost Chase Roullier to a fractured fibula early this season.

Washington re-signed Larsen this offseason, bringing him back on a league-minimum deal, and turned to the former UDFA as a starter shortly after activating him from the reserve/PUP list. A five-year Panthers lineman who reunited with Ron Rivera via Washington free agency accord in 2021, Larsen started three games last season and suffered an Achilles tear in Week 16. But the team held a bigger role for the 31-year-old snapper this season; he started eight games before going down with his latest injury.

Larsen replaced Wes Schweitzer in the lineup earlier this season, with Schweitzer — a converted guard — working as the Commanders’ center in Week 3. Despite Schweitzer being activated from IR ahead of Week 13, Nick Martin replaced Larsen in Washington’s lineup. Formerly the Texans’ long-term starter, Martin has made two starts with the Commanders. Ditto Schweitzer, though he worked as a first-stringer often during his previous two years with the franchise.

Rivera did not confirm Martin or Schweitzer as his starting center for Week 15, but both figure to be in play for the gig. The player the team does not choose will represent quality depth. Martin, 29, has made 64 career starts. Schweitzer, 29, has 56 on his resume. The Commanders boast considerable experience up front, with ninth-year linemen in Charles Leno, Andrew Norwell, Trai Turner and Cornelius Lucas in place as starters. Turner missed Week 13 due to ankle and knee issues.

OCTOBER 3: As expected, the team is indeed opening the three-week window for Robinson’s return to practice, head coach Ron Rivera confirmed on Monday.

OCTOBER 2: The Commanders are expected to activate running back Brian Robinson from the reserve/NFI list this week, as Ian Rapoport of NFL.com reports. While Robinson has been trending in the right direction, this news is nonetheless a welcome development given that he suffered multiple gunshot wounds in an attempted carjacking at the end of August. 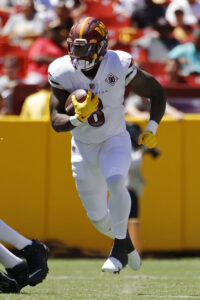 Robinson, a third-round rookie, was impressive in spring work and in training camp, leading to reports that he could be in line for the RB1 role, ahead of 2020-21 starter Antonio Gibson. Robinson took on a larger offensive workload in the early stages of the preseason, whereas Gibson was used as a kick returner for the first time in his pro career. Then, in the preseason finale, Robinson sat out, another sign that he was poised to work with the starting offense.

Shortly after the shooting, it was reported that Robinson was eyeing a return to the field this season, and in the middle of September, we learned that the Alabama product was already doing footwork and agility drills, which suggested that he was getting closer to game action. Rapoport cautions that Robinson is not necessarily assured of playing in Washington’s Week 5 matchup against the Titans; his activation would simply open a three-week window for him to practice before he either has to play or else be shut down for the remainder of the year.

John Keim of ESPN.com adds (via Twitter) that Robinson will have his right leg reexamined today (the gunshots hit his hip and knee, though there was no serious damage to his ligaments, tendons, or bones). Assuming the examination goes well, he would be activated Monday and practice on Wednesday. In his absence, Gibson and J.D. McKissic have split reps in the offensive backfield, with Gibson taking most of the handoffs and McKissic being used in more of a receiver role. Gibson has rushed 40 times for 124 yards, good for a meager 3.1 YPC average. Washington is ranked in the bottom-eight in the league in terms of rushing offense, so the club is doubtlessly eager to get Robinson going.

In other injury news, defensive end Chase Young, who is recovering from an ACL tear, is continuing to target a midseason return. That is consistent with what we heard in August. Center Tyler Larsen, meanwhile, will come off the PUP list this coming week and will be evaluated in practice (Twitter link via Keim). Larsen, who started three games for the Commanders last year, is dealing with an Achilles injury.

Chase Young was not expected to return for the start of the Commanders’ season. The team’s Tuesday transaction involving the standout defensive end will ensure he is not back until October. 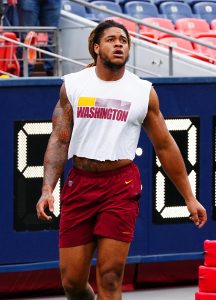 Washington moved Young from the active/PUP list to the reserve/PUP list today, a decision that will sideline the third-year pass rusher for at least the season’s first four games. Teams can begin designating reserve/PUP players today; Washington also moved offensive lineman Tyler Larsen to that list.

It is unsurprising the team is being cautious with the former Defensive Rookie of the Year. Young suffered a torn ACL on Nov. 14, 2021. Beginning the season on the Commanders’ PUP list will extend his recovery timetable to nearly 11 months. Young, 23, will miss games against the Jaguars, Lions, Eagles and Cowboys.

Last season brought a step back on multiple fronts for Young, who played a major role in lifting Washington to the 2020 NFC East title. Prior to the injury, the Ohio State product registered just 1.5 sacks and four quarterback hits in nine games. As a rookie the year prior, the No. 2 overall pick totaled 7.5 sacks and forced four fumbles, returning one for a touchdown.

Washington dealt with injuries to Young and Montez Sweat last season, one that featured the same number of wins as its 2020 campaign (seven) but a finish well back of the division-leading Cowboys. This could be the final year the team deploys its starting D-line of the past two seasons, with Daron Payne in a contract year. Sweat is signed through 2023, via the fifth-year option, and Young will become extension-eligible in January.

A 2022 bounce-back year will obviously help put Young in position to become one of the league’s highest-paid defenders, but his journey back will not involve game action for a bit.

Washington now has 21 players on the COVID-19 list, which could leave them severely shorthanded this Sunday against the Eagles:

With that, it seems likely that Spence will see some playing time this week. If he does, it’ll mark the veteran’s first action of 2021. To date, he has 10.5 sacks and 204 total tackles across eight seasons in the league.