Greedy Williams is set to make his season debut tomorrow against the Patriots. According to Mary Kay Cabot of Cleveland.com (on Twitter), the Browns have activated the cornerback from injured reserve. The team has also promoted cornerback Herb Miller and wide receiver Chester Rogers from the practice squad. 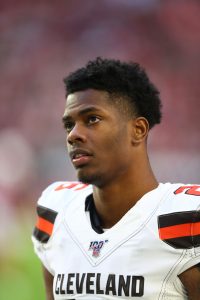 Williams suffered a hamstring injury that led to him being placed on IR in early September, and he returned to practice earlier this month. After missing the entire 2020 season with a shoulder injury, the former second-round pick started eight of his 16 games for Cleveland in 2021, collecting 41 tackles, 10 passes defended, and a pair of picks. It won’t take long for Williams to make his way back into the lineup, especially with Denzel Ward ruled out for tomorrow’s game with a concussion.

“Everything has been crisp and clean,” Williams said of his recovery (via Chris Easterling of the Akron Beacon Journal). “Just out there making plays and re-establishing myself. I build that trust back with the team, and they see I am ready. That is all that matters.”

Meanwhile, the Browns will not activate recently acquired linebacker Deion Jones from IR this week. The Falcons sent Jones to the Browns for a minimal trade haul (a sixth-round pick swap in 2024), unloading his through-2023 contract to Cleveland. The Browns designated Jones for return this week.

Cleveland acquired a six-year starter in Jones, 27, but a player who has spent the season on IR. Jones underwent shoulder surgery in May, and although he returned to practice in August and played in a preseason game, the Falcons still stashed him on IR. He is expected to be ready to debut for his new team in Week 7, Mary Kay Cabot of cleveland.com notes (on Twitter).

Miller will likely see a special teams role tomorrow, with the 24-year-old only seeing only nine defensive snaps across 10 games with Cleveland over the past two years. Rogers joined Cleveland’s practice squad in September and has been active for two games, returning two punts and three kicks. The veteran is a year removed from a 30-catch campaign with Tennessee.

The Browns have promoted two players for tonight’s game against the Steelers. The team announced that receiver Chester Rogers and tight end Miller Forristall have been elevated from the practice squad.

After failing to see the field for a regular season game during the 2020 campaign, Rogers got into 16 contests for the Titans in 2021. He finished the season with 30 receptions, his highest total since the 2017 campaign. He also continued to produce on special teams, setting career-highs in kick returns (30) and punt returns (14).

The 28-year-old landed with the Texans in late August, but after being placed on IR, he settled with the organization and earned his release. He caught on with Cleveland’s practice squad shortly thereafter. He should see a role immediately; the Browns deactivated Demetric Felton for tonight’s game, meaning Rogers should be the primary punt returner against Pittsburgh. It remains to be seen if he’ll seen any role in a WR grouping that is currently led by Amari Cooper, Donovan Peoples-Jones, David Bell, and Anthony Schwartz.

Forristall earned a pair of championships during his time at Alabama, but after finishing with only 44 receptions in parts of five seasons, he went undrafted in the 2021 draft. He spent most of the 2021 campaign in Cleveland, and he could make his debut tonight behind David Njoku and Harrison Bryant.

Linebacker Tae Davis was already named as a player who won’t see action with the Texans this season earlier today. More names are being added to that list, including a pair of noteworthy free agent additions from this offseason.

In addition to releasing Davis, Houston is cutting fullback Andy Janovich, per a team announcement. The 29-year-old signed a one-year deal with the Texans in March. A sixth-round pick of the Broncos in 2016, Janovich earned himself a three-year extension in Denver in 2019, but was traded to the Browns during the subsequent offseason.

He saw a slightly lesser offensive workload in Cleveland than in did in Denver, but still proved effective in his role – one which fewer and fewer teams are incorporating into their offenses. The Nebraska alum was a Pro Bowl alternate, and nearly half of his $1.5MM in scheduled compensation was guaranteed, making his release somewhat surprising. On the open market again just weeks before the regular season, he will look to find a new home quickly in a system which accommodates his skillset.

The Texans didn’t release wideout Chester Rogers, but he still won’t see the field in 2022. Houston placed him on injured reserve, after signing him earlier this month. The 28-year-old began his career with the Colts, with whom he had the most productive season of his career (53 receptions, 485 yards and two touchdowns in 2018). A knee fracture cost him significant time the following year, and he didn’t see any action in 2020. With the Titans last year, though, the former UDFA totaled 938 all-purpose yards as he took on a large role as a returner.

That made him a logical signing with the Texans, who will be without second-round rookie John Metchie for the entire campaign. Instead, the team will look to younger options on offense. Per Houston’s announcement, they also waived undrafted offensive lineman Myron Cunningham; the Arkansas alum, like Janovich and Rogers, now faces the task of landing on a new roster with plenty more cuts yet to be made.

8:25pm: The Texans have indeed signed Rogers to a contract, reports ESPN’s Adam Schefter (on Twitter). It will be a one-year deal for the receiver.

9:00am: The Texans could be eyeing an addition or two in their receiver room. Houston is working out free agents Willie Snead and Chester Rogers, per Aaron Wilson of Pro Football Network. Kurt Benkert was the quarterback throwing to the two receivers, Wilson adds (on Twitter). The team is not planning to sign Benkert at this time, Mike Garafolo of NFL.com tweets.

Snead, 29, has been a member of this offseason’s free agent WR class which has, with few exceptions, received little interest even as training camps have opened up. He is coming off of a disappointing 2021 season, in which he totalled four receptions between the Raiders and Panthers. The former UDFA is best known for his time in New Orleans, where he totaled nearly 2,000 yards in three seasons. That was followed by a three-year stint in Baltimore, in which he occupied a secondary role in the team’s low-volume passing attack. Eyeing a more favorable landing spot, the veteran has remained patient while weighing potential free agent destinations.

At 28, Rogers is in a similar position in terms of age and desire for a longer-term NFL home. His best season to date came in 2018 with the Colts, when he registered 53 catches for 485 yards. That led to him being tendered the following year, but a knee fracture ended his final Colts season prematurely. The Grambling State product spent 2020 on the Dolphins’ practice squad, then last season with the Titans. He logged a similar snap share (42%) on offense to his previous campaigns, but logged the largest workload of his career as a returner. ESPN’s Adam Schefter tweets that Rogers has received interest from “multiple teams.”

The Texans lacked established wideouts aside from Brandin Cooks heading into this season. The position then received a significant blow when it came out that second-round rookie John Metchie will miss the 2022 season with Acute Promyelocytic Leukemia. As at least a stop-gap option, then, either of these free agents could take on a notable role in Houston as the team looks to take a step forward on offense, and they aim to rebuild their market value.