The best-case scenario has been confirmed with respect to T.J. Watt. The Steelers’ top defender will not require surgery, and he will begin the rehab process which should keep him sidelined for roughly six weeks, Ian Rapoport of NFL Network reports (on Twitter). 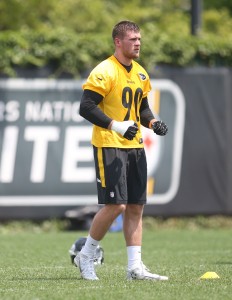 Watt suffered a torn pectoral muscle, as was initially feared. However, as Rapoport details, the tendon was not torn, leaving rehab as an alternative to what would have likely been season-ending surgery. By taking the former route, Watt will be able to return at some point relatively soon, as he confirmed (on Twitter) this afternoon.

The reigning Defensive Player of the Year, Watt’s absence will still be felt, of course. Pittsburgh will turn to 2020 third-rounder Alex Highsmith and recent trade acquisition Malik Reed as starters on the edge. Not surprisingly, the team has already taken steps to add depth at the position, though.

The Steelers signed Ryan Anderson to the practice squad, per Rapoport’s colleague Tom Pelissero (Twitter link). A former second-round pick, the 28-year-old never lived up to his draft stock during his four seasons in Washington, with his best career season coming in 2019 (44 tackles, four sacks, five forced fumbles). He initially signed with the Giants last offseason, but was cut in August and did not see any action in 2021.

Anderson could see himself elevated on gamedays; the Steelers are also likely to be active in searching for more depth options on the open market. It remains to be seen if Watt will be placed on IR to open a roster spot, but the fact that he will return around the midway mark of the season is a hugely positive development for the Steelers’ 2022 aspirations.

11 comments on “Steelers’ T.J. Watt Will Not Require Surgery”