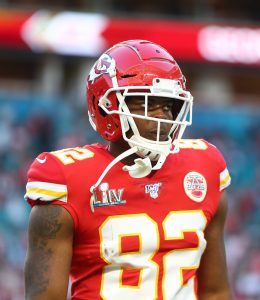 Yelder is the notable name in this grouping, as the tight end appeared in 26 games for the Chiefs over the past three seasons. This included a 2020 campaign where he set career-highs across the board, including games played (14), receptions (seven), receiving yards (36), and offensive snaps (194). He also has four playoff games (including three in 2019) and a Super Bowl ring on his resume.

Logan Thomas sits atop the depth chart in Washington, meaning Yelder will end up battling with the likes of Temarrick Hemingway, John Bates, Marcus Baugh, Tyrone Swoopes, and Sammis Reyes for backup reps.

Stephens has bounced around the NFL since going undrafted out of Cincinnati in 2018, spending time with the Saints, Rams, Broncos, Seahawks, Dolphins, and Seahawks (second stint). He saw time in 13 games for Seattle last season, appearing mostly on special teams.